Here at the ACAFE editorial office, we’ve suspected for some time that News Corp. Chairman Rupert Murdoch has entered a state of severe mental decline. Please consider the symptoms: Murdoch has declared “war” on the New York Times; cried that President Obama was “attacking” him by casually noticing the obvious RNC ties; made a doomed-from-the-start attempt to charge Internet fees for his wingnut “news” publications; claimed with a straight face before buying the Wall Street Journal that it would be free of his editorial interference … and expected to be believed; constantly obsesses that bloggers will one day ruin him; hired Sarah Palin and Glenn Beck; claimed in a recent speech delivered in the UK that he employed “real” journalists – and that the media in the U.S. are “liberal”; accepted a humanitarian award from the ADL; now, he wants to revive the Hollywood Blacklist  …  Mr. Murdoch has been mentally crippled by senility, obviously, but is so wealthy that the press writes off every delusional, paranoid, Napoleanic statement as the prattling of an amusing eccentric.  Please, worlld, take notice – this isn’t the Middle Ages – psychiatric intervention is critically needed here.  Mr. Murdoch deserves the best established pharmaceutical and neuropsychiatric treatments that money can buy. 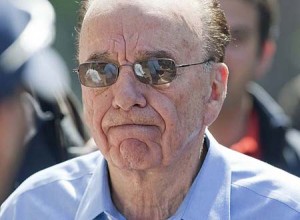 The mogul said he will not report or promote new films unless the stars talk to his worldwide media outlets – which include TV stations and newspapers.

Critics of Mr Murdoch, 79, said the boycott shows how he abuses his power to intimidate rivals.

The Australian-born tycoon wants to take full control of Sky TV in the UK, but has insisted that he will not exploit his dominant commercial position.

A critic of Mr Murdoch’s blasted yesterday: “This bizarre move illustrates just how predatory he will be if the Government roll over and let him have Sky.”