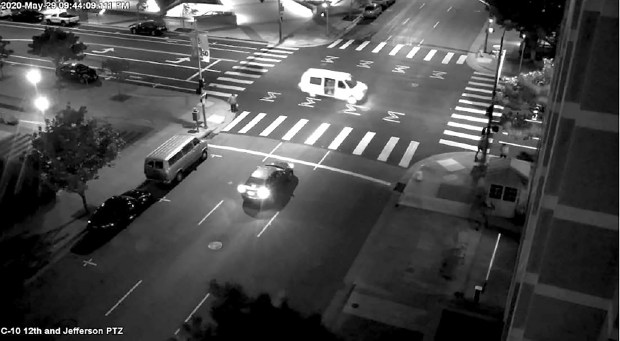 This May 29, 2020 surveillance photo provided by the FBI shows a van with the passenger side door open as someone fires at a security kiosk at the Ronald V. Dellums Federal Building in Oakland, Calif. Robert Alvin Justus Jr. has been charged with aiding and abetting the murder and attempted murder of two Federal Protective Services security officers in the shooting, federal authorities announced Tuesday, June 16, 2020. Justus is accused of being the driver of a van from which U.S. Air Force Staff Sgt. Steven Carrillo allegedly shot and killed federal officer Dave Patrick Underwood, 53, and wounded of another officer outside the Ronald V. Dellums Federal Building on May 29. (FBI via AP)

SAN FRANCISCO — Four alleged members of a militia group associated with the so-called Boogaloo movement have been indicted on obstruction charges related to the killing of two law enforcement officers in California, prosecutors announced Friday.

The indictment charges Turlock resident Jessie Alexander Rush, 29; Robert Jesus Blancas, 33, of Castro Valley; Simon Sage Ybarra, 23, of Los Gatos; and Kenny Matthew Miksch, 21, of San Lorenzo, with conspiracy to obstruct justice and destroy records to inhibit the investigations into the killings of Federal Protective Services Ofc. Dave Patrick Underwood in Oakland last May, and the killing of Santa Cruz Sheriff’s Sgt. Damon Gutzwiller a week later. Both officers were allegedly gunned down by Steven Carrillo, 32, another follower of the anti-government Boogaloo movement that is based on a belief in an impending second American Civil War.

The charging records allege the group tried to delete messages and other electronic data that was proof of their discussions about killing police. They are alleged to be part of a Boogaloo militia known as the “Grizzly Scouts,” which is based in Northern California. The militia “periodically met in person for firearms training and other purposes.”

Each of the four defendants allegedly held ranks in the Grizzly Scouts with various roles; Blancas and Misch — who went by the moniker “Not ATF” — were First Lieutenants and Ybarra was a corporal “and his responsibilities included recruitment,” the indictment says. Rush was allegedly its founder and commanding officer.

The four defendants reportedly communicated on a WhatsApp group called “209 Goon HQ,” and a Facebook group called “/K/alifornia Kommando,” which included Carrillo. It is only the latest example of federal authorities uncovering communications between Carrillo and other Boogaloo followers in which they allegedly discussed or planned violent attacks.

After Carrillo killed Underwood he bragged about it in the WhatsApp group, telling the others, “Dudes i (sic) offed a fed,” the indictment alleges.

A week later, after Santa Cruz deputies discovered Carrillo’s abandoned white van with bomb making material parked on a turnout in Ben Lomond, they began to converge on his home a short distance away. That’s when Carrillo reportedly called the others for help ambushing the officers, and suggested he was listening to them on a police scanner.

“Kit up and get here. Theres inly one road in/out. Take them out when theyre coming in. … Police are here … Theyre waiting for reenforcements im (sic) listening to them,” Carrillo allegedly wrote.

In the end, no one came to Carrillo’s aid. Undeterred, he allegedly ambushed Guztwiller and several other deputies and California Highway Patrol officers, opening fire and lobbing pipe bombs at them. Carrillo killed Gutzwiller, wounded two other deputies, and was injured himself in the June 6 incident, which ended with Carrillo’s arrest, authorities say.

A week before the Ben Lomond shooting, Carrillo and a Bay Area resident named Robert Allen Justus allegedly met up at a BART station and drove to Oakland intent on targeting police officers. They arrived at the Ron Dellums Federal Building in downtown Oakland and Carrillo allegedly opened fire at a security booth, mortally wounding Underwood and injuring his partner.

“The indictment alleges Rush immediately instructed the Grizzly Scout member on the WhatsApp group to delete evidence on his phone. In addition, the indictment alleges that less than an hour after the shooting in Ben Lomond, Blancas deleted files related to the Grizzly Scouts from a Dropbox account,” U.S. Attorney spokesman Abraham Simmons said in a news release. “Further, within hours of the shooting, members of the Grizzly Scouts including Rush, Blancas, Ybarra, and Miksch allegedly began to reconnect on an alternative communications application.”

Included in the deletions was Carrillo’s “I offed a fed remark,” the indictment says. It is not the first time authorities uncovered an online communication with such an admission from Carrillo.

Last year, while investigating an alleged Boogaloo associate named Ivan Hunter, authorities uncovered Facebook messages in which Carrillo told him, “I did better,” when Hunter talked about wanting to target police buildings in the wake of the George Floyd killing. Hunter, a Texas resident, faces federal charges of shooting at a police precinct station in Minnesota. Authorities also found money transfers between the two, according to court records.In West Virginia, federal prosecutors charged an alleged Boogaloo associate with selling illegal gun modifiers to Carrillo and others last year.

All four defendants face up to 20 years in federal prison and a $250,000 fine if convicted as charged. Separately, Blancas was charged last year with federal child enticement, related to his online conversations with a teen girl, prosecutors say.

Carrillo and Justus,charged with Underwood’s murder last year, face the death penalty if convicted. Additionally, Carrillo faces potential death penalty charges in Santa Cruz County, related to the attack on Gutzwiller and the other officers.