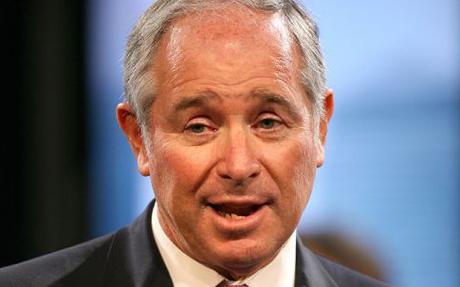 The billionaire head of the private equity giant which owns Center Parcs and the London Eye has likened US President Barack Obama’s plans to raise taxes on the private equity industry as being akin to Adolf Hitler’s invasion of Poland.

The comments, made by Blackstone chairman and co-founder Steve Schwarzman in what he thought was a private meeting, reflect the strength of feeling among Wall Street’s private equity chiefs who are being threatened with paying the same levels of tax on their income as ordinary Americans.

In an appearance before the board of an unnamed charity, Newsweek reported that Mr Schwarzman, who is estimated by Forbes to be worth $4.7bn (£3bn), said: “It’s war. It’s like when Hitler invaded Poland in 1939.” The Daily Telegraph has verified that the comments were made and are accurate.

It follows the Obama administration’s consideration of raising the tax on “carried interest” – the share of profits private equity managers receive from the portfolio companies they manage – from 15pc to 35pc.

His remarks are even more noteworthy given that Mr Schwarzman is a practising member of the Jewish faith.

It is not the first time Mr Schwarzman has attacked the Obama administration, and what he appears to increasingly believe are its anti-Wall Street policies. In a comment piece in The Washington Post in February, he wrote that bank-bashing could destroy the US economy’s fledgling recovery, as banks may become too scared - “under siege”, as he put it - to start lending again.

His new comments caused consternation among the American media, with The New York Times referring to it as his “unfortunate war analogy”, while Salon quipped about “Obama’s invasion of Poland”.