She's not at all my cup of tea (party). Fifth-Circuit Texas Appeals Court Judge Edith Jones is a far-right racist with ties to the upper-echelon of the Republican Party, and some rather strange religious beliefs that have influenced highly questionable legal rulings:

A group of civil rights organizations and legal ethicists filed a complaint of misconduct against Jones on June 4, 2013, after she allegedly said that "racial groups like African-Americans and Hispanics are predisposed to crime," and are "prone to commit acts of violence" which are more "heinous" than members of other ethnic groups. ... Jones also stated that a death sentence is a service to defendants because it allows them to make peace with God, and she "referred to her personal religious views as justification for the death penalty".  Jones allegedly made the remarks during a speech to the University of Pennsylvania Federalist Society.

According to the panel of judges, however, even though Jones admitted to making many of the statements detailed in the ethics complaint, that conduct did not amount to judicial misconduct.

The three-member panel concluded that the evidence showed Jones used the term “red herring” when expressing her view that a challenge to the death penalty on the ground that “it is administered in a racially discriminatory manner is nonviable.” In light of Supreme Court precedents, the panel concluded “we again cannot find that such a view indicates improper bias or misconduct.”

The panel of judges dismissed the complaint against Jones in August but did not make the order publicly available until Wednesday, and only after civil rights groups announced they were appealing the decision to the Judicial Conference of the United States.

The judges investigating the allegations against Jones failed to interview student witnesses and discounted affidavits filed shortly after Jones’ speech, according to the appeal.

Judge Jones enters the next article from Texas Lawer obliquely, and whether she is responsible for the latest abortion ruling that has managed to close clinics and aggravate women's rights activists across the country, she has made equally controversial decisions in the past. And note that she has close ties to the deciding panel of that ruling:

Who Wrote for the Majority in Controversial Abortion Decision?

When a panel of three judges issued the U.S. Court of Appeals for the Fifth Circuit's most controversial decision of the year by upholding a Texas law that regulates—and potentially shuts down—seven abortion clinics on June 9, lawyers naturally wondered who wrote the decision.

All were disappointed as the first page of Whole Woman's Health v. Cole labeled the panel decision as "per curiam"— a designation the appellate court reserves for short opinions on well-settled law that have little precedential value. That designation also means page 56 of Cole would have no signature identifying its author, although the decision names the panel members as Judges Ed Prado, Jennifer Elrod and Catharina Haynes. [See "Strict Regulation of Texas Abortion Clinics Upheld," Texas Lawyer, June 9, 2015.]

"This is an unconventional use of a per curiam device because this is a lengthy, law-making opinion," said Chris Kratovil, an appellate lawyer and member of the Dallas office of Dykema Cox Smith. "My assumption is that the panel released it as a per curiam opinion in an effort to demonstrate the clarity of the law and to minimize controversy.''

Kratovil, who formerly served as a law clerk for Fifth Circuit Judge Edith Jones, said that while it's an unusual move to put a per curiam label on such a hot opinion, it's an understandable one.

"The use of the per curiam also ensures that no one member of the court is singled out for a social media firestorm,'' Kratovil said.

However, last year, when the Fifth Circuit rejected a stay of lower court rulings that deemed parts of the same Texas law unconstitutional, the decision was signed by Jones—who considered the case along with a panel that also included Elrod and Haynes. [See "Fifth Circuit Finds Abortion Provisions in H.B. 2 Constitutional," Texas Lawyer, April 7, 2014.]

Jones has put her name on controversial abortion decisions before. In 2004, Jones wrote McCorvey v. Hill, an opinion that took both sides of the abortion debate by rejecting an attempt to vacate the Supreme Court's 1973 Roe v. Wade in a majority opinion, but blasted Roe v. Wade in a concurring opinion that also contained her name. [See "Judge Takes Both Sides in Abortion Ruling," Texas Lawyer, Sept. 27, 2004.]

"The world has changed, and not for the better," Kratovil noted. "Any activist with a Twitter account or a Facebook page now has a platform. I don't blame any member of the court for not wanting to be targeted with threats and hate mail." 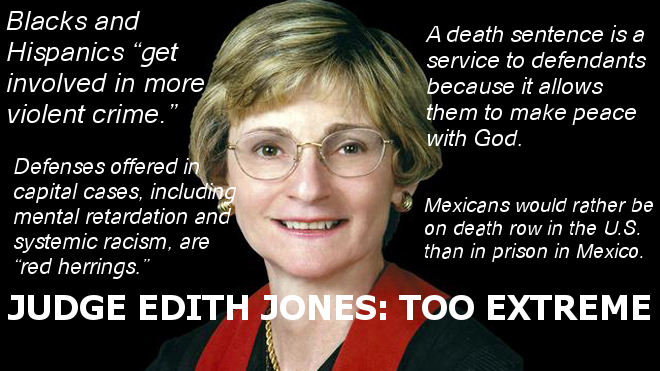 So who is this radical fundamentalist who thinks the death penalty a gift, this legal harpie who wields a powerful judicial  hammer and loudly pounds holes in Roe vs. Wade? And given her political ties, why hasn't the Texas Bar insisted forcefully that she recuse herself from all political decisions, particularly concerning abortion?:

Edith Jones and the GOP

Edith Hollan Jones (born April 7, 1949) is a Judge and the former Chief Judge of the United States Court of Appeals for the Fifth Circuit.... She was in private practice in Houston, Texas, from 1974 until 1985, working for the firm of Andrews, Kurth, Campbell & Jones, where she became the firm's first female partner. She specialized in bankruptcy law. She also served as General Counsel for the Republican Party of Texas from 1982-83.

She was nominated to the Fifth Circuit by President Ronald Reagan on February 27, 1985, and confirmed by the United States Senate on April 3, 1985....

She sits on the board of directors of the Boy Scouts of America and the Garland Walker American Inns of Court.

In 2010, Jones visited Iraq as part of the U.S. State Department's Rule of Law program, where She advised and encouraged Iraqi and Kurdish judges.

Jones has been mentioned frequently as being on the list of potential nominees to the Supreme Court of the United States. A 1990 report from The New York Times cited her as George H.W. Bush's second choice for the Supreme Court vacancy filled by Justice David Souter. The Chicago Sun-Times and several other newspapers reported on July 1, 2005, that she had also been considered for nomination to the Supreme Court during the presidency of George W. Bush.

That woman is a certifiable psychopath spewing wacko beliefs like some
of the death cult leaders out there. Move over Charles Manson, here comesEdith Jones. Remember if you’re going to murder a lot of people, do it legally the way the
Nazis did. Look, she’s even got blonde hair too.