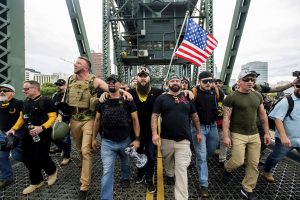 It’s undeniable that the GOP has been gradually losing members since the day President George W. Bush left office. God forbid they should grow their base by engaging with people of color. But their shrinking electorate is not due to so-called “replacement theory” — a conspiracy theory regurgitated to mobilize the MAGA base.

The anger over what some couch as “the great replacement” is also directly responsible for the increase in hate crimes and the deaths of innocent Black and brown people. And there are some who use this pretext to raise funds so Republicans can regain control of the Congress. This strategy is both evil and dangerous, in my opinion.

Although both parties have benefited from National Rifle Association contributions, the longstanding GOP quid pro quo is directly linked to Republicans’ continued blockage of substantial gun reform legislation. This covert (and often out-in-the-open) strategy has led to a rapid escalation in gun ownership and has allowed weapons of war to be wielded by everyday American citizens, including an 18-year-old bent on the slaughter of children in Uvalde, Texas, this week.

Republicans own guns at twice the rate of Democrats (42% versus 20%), according to a recent Pew Research study. And the disturbing advent of “ghost guns” makes it possible to assemble untraceable weapons in the privacy of your own home.

Factions of the evangelical movement have devolved into sects, not dissimilar to religious cults. Unsuspecting churchgoers are being brainwashed by unholy values and mass manipulation while scripture is being skewed to justify hate. The denunciation and delegitimization of other religions is not only un-Christian, it is evil.

Then-President Donald Trump’s Bible-holding photo-op during the George Floyd protest in Washington’s Lafayette Square was a direct message to those on the religious right who confused him as “the Chosen One.” The contention that his followers march “With God on Our Side” (Bob Dylan’s timeless classic) is also manipulative and evil.

Such attempts to assert divine authority have been used throughout history to justify war and to actuate genocide. The Islamic State’s rampage across Syria and Iraq was a good recent example. At home, the promise to overturn Roe v. Wade is also being used as a rallying point among the GOP’s evangelical base.

And Russian leader Vladimir Putin invaded Ukraine with the endorsement of the Russian Orthodox Church, which earned a rare rebuke from Pope Francis himself. Putin’s attempted land grab might’ve been successful if Trump were still in office to limit U. S. and NATO involvement.

This disturbing pattern is underscored by the Conservative Political Action Conference’s decision to hold its annual meeting in Viktor Orban’s authoritarian-ruled Hungary. Republicans fawn all over Tucker Carlson and his race-baiting diatribes.

As these strategies continue to unravel, look for Trump to elicit another call to action. White nationalist forces are armed and listening to his every word. It could be an especially dangerous time if more Republican seats are lost in the midterm elections. The Capitol insurrection could pale by comparison if Trump decides to unleash the Kraken.

I fear that we haven’t seen the end of the Proud Boys, the Oath Keepers and the hundreds of hibernating paramilitary groups Trump once told to “Stand back and stand by.”

If this disturbing scenario should come to fruition, the real question would be: How many gun-owning citizens would be tempted to join in the fight? And we all know which side has been systematically armed by the NRA with a daily assist from Fox News.

The Justice Department appears closer to some kind of legal action against Donald Trump for his role in the Capitol insurrection, raising the prospect that he may never hold office again. Although an indictment could spark Civil War II, his authoritarian schemes must be stopped before we lose our free press and the majority of our constitutional rights, while the far right ensures that the Second Amendment reigns supreme.