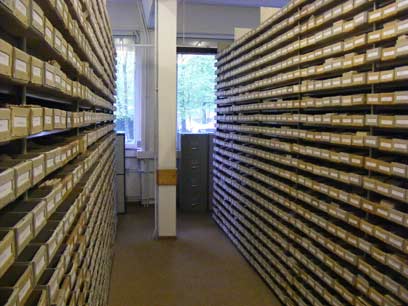 Each name has a card. Bad Arolsen (Photo: Dor Glick)

BERLIN - Welcome to Grosse Allee 5 in the town of Bad Arolsen. Here you will find just one thing: documents. Fifty million card cabinets containing the names of 17.5 million people who were persecuted during the Third Reich. Gypsies, social democrats, homosexuals, communists, people the Nazis just wanted to have taken care of, and mainly - Jews.

Walking through the shelves of names organized in little card catalogues is a bit like flipping through a phone book. The place is flooded with familiar Jewish names. For a random family name like Abramovich, for instance, there are 849 spelling variations. As the shelves continue, you come across additional familiar names with similar numbers of spelling options. The inconceivable number – six million – starts to come into focus. The adage from Holocaust memorial ceremonies – to each person a name – takes shape, typed in black on the shelf.

"Satan's administration" is what Udo Jost, the head of archives at Bad Arolsen, calls the world's largest archives of the Nazi horrors. The documents housed here were found in thick binders throughout Germany and occupied Europe starting in 1945, and include records of factory-like operations that had to show production and expediency. In them are descriptions of the camps, of the deranged plans, of those who remained alive, and of the enormous majority that did not survive.

The archive is not complete. In the last months of the war, with defeat quickly approaching, the Nazis launched a mass campaign to destroy documents, which took place mainly in locations that had time to rid of them. The farther east you go on the map, the more documentation was destroyed. From Sobibor, for instance, nearly nothing remains. However, fortunately for history's sake and the sake of defending against Holocaust deniers, a massive scale of material remains here as testimony. About Buchenwald and Dachau, you can find out everything in Bad Arolsen – what they received to eat on a given day, how many lice were on the head of a given inmate, etc.

All of this plunder was collected by conquered Germany's new masters: the Americans, Soviets, British, and French. At first, the city of Kassel, in the center of the country, was chosen for the collection point of all the material. However, Kassel was totally destroyed in the bombings and lacked sufficient intact infrastructure. Not far from there was an abandoned SS headquarters, which had good telephone and telegraph connections vital for the organization's operations. Thus, the International Tracking Service, originally charged with locating displaced persons scattered across Europe, arrived in Bad Arolsen.

A tour of one of the rooms with Kathrin Flor, the head of ITS communications, is a lesson in history unlike any other. In the space of mere meters, without the grandiose display of a museum, the most tragically interesting stories of the 20th century can be found.

One gray binder, for instance, contains a document entitled "Lebensborn", the document entering into force the Nazi organization responsible for encouraging and supporting Aryan births by pairing "racially pure" women with SS officers, and later by transferring blonde-haired, blue-eyed children from eastern Europe to Aryan German families within the boundaries of the Reich. Along the grey text of the typewriter, hand-written corrections can be seen, corrections made in pen that are amazingly preserved and look as though they were written just last week. The corrections were made by none other than SS leader Heinrich Himmler.

This is what can be read today on the businesslike document:

The committee operates in support of the following objectives:

1. Creation of families with many biologically and racially pure children

2. Support for single mothers that can bring biologically and racially pure children into the world

3. Support for such children

Jumping seven years ahead in time, the next binder delves the reader deep into the period of the most wide-scale, systematic murder known to humanity. The document is dated October 12, 1944 and listed under the anemic title "List of Names" containing the personal details of 1,000 people - 700 men and 300 women, all Jews. Number 672 on the list: Yitzhak Stern, Profession: Accountant. This is the original Schindler's list. (To view the full list, click here) ...