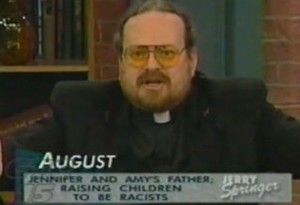 Aryan Nations leader August B. Kreis III may be a white supremacist who appeared on Jerry Springer and was investigated for possible Al Qaeda connections, but this week he was sentenced for something much less colorful: fraud.

On Wednesday, Kreis was sentenced to the six months he already served, followed by six months of house arrest and two years probation. Kreis was also ordered to pay back $193,000 for veterans’ benefits he improperly claimed.

“I haven’t gotten out there to hurt anybody. I don’t preach to hurt anybody, except the Jews, and I’ll keep doing that. But that’s my First Amendment rights,” Kreis said at his sentencing hearing in U.S. District Court in South Carolina. “As long as I obey God’s laws, I don’t care about anything else.”

Kreis pleaded guilty to fraud in August after lying to Veterans Administration officials to get pension money. He had served in the Navy for nine months during the Vietnam War, but was discharged early “based upon a determination that he was not suited for military service.”

Federal officials began investigating Kreis after he said that “he and members of his movement desired to join al-Qaida in its Jihad against a United States government,” according to court documents. “You say they’re terrorists, I say they’re freedom fighters,” Kreis told CNN of Al Qaeda in 2005. “And I want to instill the same jihadic feeling in our peoples’ heart, in the Aryan race, that they have for their father, who they call Allah.”

The Feds didn’t find a connection to Al Qaeda, but they soon discovered that though Kreis had qualified for a need-based “improved pension” for his military service, he did not report over $33,000 in income he made in 2005, and made false statements to the Veterans Administration that he had made no outside income that year.

According to the Southern Poverty Law Center, Kreis “heads one of a handful of competing splinter factions of the once-mighty Aryan Nations. Kreis fervently advocates the mass murder of Jews, non-whites and ‘race traitors.’ He also promotes ‘lone wolf’ domestic terrorism, which he calls ‘leaderless resistance under the radical banner of pan-Aryanism.’”

And Kreis and two of his daughters appeared on this classic 1995 episode of Jerry Springer called “A Racist Family.” Check out the fight at the 6:15 mark: