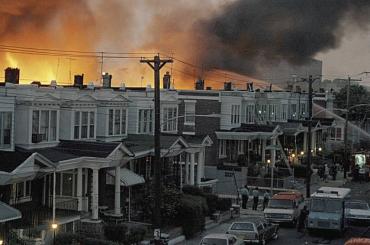 Gerri Bostic lost all her material possessions 25 years ago when police dropped a bomb on her block, killing five children and six adult members of the militant group Move and incinerating 61 row homes.

Perhaps her biggest losses were her peace of mind and sense of community.

Her West Philadelphia neighborhood - now nearly vacant and eerily quiet - never recovered from the city's horrific botched attempt to arrest the Move members on May 13, 1985. The violent confrontation was a rare bombing of American citizens by civilian authorities in the United States.

Today, after spending more than $43 million on redevelopment, the city has two blocks of boarded-up eyesores to show for its efforts. The homes built to replace those lost in the bomb-ignited inferno were so shoddy that officials stopped making repairs and offered buyouts.

"There's nothing nice about this block anymore," said Bostic, 89. "All the people are gone."

And now that a long-running lawsuit over the replacement houses has ended, Councilwoman Jannie Blackwell says the city needs to put the past to rest on Osage Avenue and Pine Street.

"It's time to make peace with it all and fix up the properties," Blackwell said. It won't be easy; Philadelphia has many blighted areas competing for attention. And developers of these blocks will have the added challenge of winning support from embittered residents whose dream of homeownership has been a nightmare.

The revolutionary group came to the city's Cobbs Creek section in 1981, three years after a shootout with police at its previous home. One officer died in the firefight; nine Move members went to prison and others moved to Osage Avenue. They turned their row house into a fortified compound, with a bunker on the roof and wooden slats over the windows. Loudspeakers blared obscene daily rants against authorities for jailing their peers.

Police decided to move on Move in mid-May 1985, obtaining arrest and search warrants on the belief the group's house contained illegal weapons and explosives. Authorities evacuated the block on May 12, telling residents there would be a police action the next day.

On May 13, police began an hourslong siege using water cannons, tear gas and bullets. A state police helicopter flew overhead carrying Philadelphia officers and a canvas satchel loaded with explosives. The bomb ignited a gasoline-fueled fire that killed the Move militants and children and obliterated two blocks of homes. Ramona Africa, then 29, and Birdie Africa, then 13, escaped with major burns.

The Move survivors and victims' relatives collectively received about $5.5 million in compensation from the city. Some Move members now live in a blue-and-white Victorian in the city's Clark Park section, about two miles from Osage Avenue.

Ramona Africa, now 54, said the group of about three dozen members continues to fight what it considers the unfair incarceration of eight members for the 1978 officer killing. A ninth died in prison.

"There is no justice in the legal system," Africa said. "Not just for Move, but for anybody."

For MOVE's neighbors, a quarter-century of incompetence and injustice

This week, Philadelphians are remembering a dark day in the city's history.  On some blocks in West Philadelphia, though, residents don't need any media reports to recall the 1985 MOVE disaster. For them, every day is full of reminders.

On Osage Avenue and Pine Street, the fire was just the beginning of a 25-year nightmare of incompetence and injustice.

It was the afternoon after Mother's Day in 1985 when police dropped a satchel of explosives onto the roof of the house at 6221 Osage Avenue.  The bomb caused a fire that spread through the house, eventually engulfing the block.  Five children and six adults, who were in the bombed MOVE house, died.  61 homes, destroyed or damaged in the primarily African American middle-class neighborhood, were torn down. And, in the emotional aftermath of the fire, Mayor Wilson Goode promised to rebuild homes and make the residents whole.

The block where the bomb was dropped

Today the block looks very different from that disastrous day in 1985.

It's quiet except for the sound of a few birds, but the sea of boarded-up houses speak volumes about what the years have been like for residents, and what life is still like here.

Elizabeth “Gerri” Bostic is 89 years old, but ask her about all the boarded-up houses, and the shoddy work on her own re-built home, and she gets fired up.

Bostic's sitting in a chair in the small living room of her house on Osage just down the street from the old MOVE house.  At first it's tough to tell what the problem is. It looks like many a grandmother's home: full of decorations galore and plastic covered furniture. But a closer inspection shows she's battling the water.  The contractor the city hired to rebuild the homes was convicted of stealing money intended for the neighborhood's reconstruction. The homes soon showed cracks and needed repairs. The repairs then needed repairs, all of it adding insult to injury for the block's residents.

Bostic points out yellowish stains on the walls. There have been many roof leaks, she says. She makes her way into the bathroom to demonstrate the plumbing problems. Then onto the back door where she points to a pool of water that regularly accumulates in her backyard.  She says she pulls on her late husband's boots and uses a push broom to keep the water from moving toward her house.

“I moved into this house because I wanted to stay here until I died,” says Bostic. “I don't like moving around. I'm angry with the city – what they did. They were supposed to make us whole.  They built the houses, they didn't do them correctly. I came here to live, pay my taxes – I still do.”

After 15 years of problems with the homes, the city offered families $150,000 to pick up and leave. All but 24 families on Osage and Pine accepted the deal.  The two dozen families who did not take the buy-out sued, and a jury awarded them just over $12.8 million. An appeals panel cut the sum down to $6 million, then the families' lawyer settled with the city.

Of the 24 families who sued, 16 have taken what they were entitled to under the settlement – $190,000 and title to their homes. Eight families are challenging the sum their lawyer settled for, and say they deserve more. Mayor Michael Nutter's spokesman, Doug Oliver, says the city is prepared to pay the $190,000 settlement sum to the eight families who still have not accepted it.

Block Captain Gerald Wayne Renfrow says it would take more than the city's offering to rebuild a new nice house and put his family up somewhere during the construction. Renfrow and his wife have been at 6234 Osage — right across from the old MOVE house — since 1978. Renfrow says he's still looking for a resolution that recognizes the neighbors' pain and sacrifice.

“After they dropped a bomb on our block,” says Renfrow, “they took the lives of 11 people, poorly reconstructed our houses. Now they've left for 10 years boarded-up houses – blight they're forcing us to live amongst.”

A man who lives a few doors down from the old MOVE house says he doesn't like to talk about the MOVE bombing and he's glad his grandchildren don't know about it because they might get too upset and grow up bad.

89-year-old Gerri Bostic says if her husband were still alive the couple would take a trip just to get away until the anniversary is over. Instead, to pass the Anniversary, she's going to close her door and not talk to anybody.