THEATER REVIEW OF ‘FABRIK’: The Suit Maker Who Sounded the Alarm About Nazis 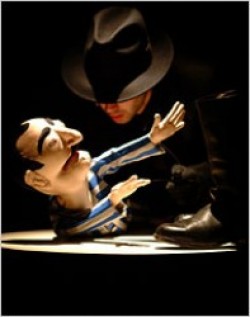 If you’ve always found puppets only slightly more appealing than, say, clowns, “Fabrik: The Legend of M. Rabinowitz” may well change your mind. This modest yet powerfully affecting production capitalizes on the range of the art form and takes it to impressive heights.

But be warned: this is not “Sesame Street.” Given some of its imagery and subject matter, the play is not appropriate for children under 10.

The story traces the life of the real Moritz Rabinowitz, a Polish Jew sent to Norway by his family to escape pogroms. In the years before World War II he grew highly successful as a suit manufacturer. (“Fabrik” is Norwegian for “factory.”) Chipper, fastidious and ever reciting his rules for the successful businessman, Moritz senses the virulent anti-Semitism spreading and writes opinion pieces in local and national journals warning of its advance. As an outspoken major employer, he is singled out for his views and eventually sent to the Sachsenhausen concentration camp near Berlin.

Three puppeteers in multiple roles — David Arkema, fortunately not painting Moritz in entirely saintly colors; Gwendolyn Warnock, deftly portraying most of the women; and Kirjan Waage, a tireless Norwegian fielding 16 parts (he also designed the hand-and-rod puppets) — keep the narrative flowing inexorably across a seamless 55 minutes. The three performers wrote the script with Gabrielle Brechner; they are all members of Wakka Wakka Productions, the company presenting the piece.

Throughout “Fabrik” the inventive stage effects and their variety are consistently startling. Early scenes of Moritz at work or in bed with his wife possess a warm humor recalling the Muppets. (The Jim Henson Foundation helped support this production.) But gradually — beginning with an imaginative dream sequence in which Moritz swims through an aqueous environment, hunted by a sharklike Hitler — the mood begins to shift. As the Holocaust deepens, the tableaus become more Expressionistic and nightmarish. The image of a puppet on its side, lifelessly staring downward, will haunt you.

Previous Article
James Glassman, the Successor of Karen Hughes, Eyes the Internet
Next Article
Bush Orders NSA to Snoop on US Agencies

Bush Orders NSA to Snoop on US Agencies
Jan 31