"... Some members of Quebec’s elite, nationalist and federalist, supported Nazi collaborator Marshall Philippe Petain and his Vichy government in France during the Second World War and then helped bring war criminals to safety in Quebec after the war ended. ..." 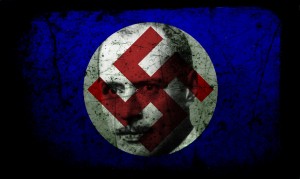 Confronting the darker side of Quebec’s history has not been easy, particularly for that province’s small but influential elite, dominated by nationalistes. Every society has produced popular historical myths that leave some dirty laundry buried in the past. What is unique about Quebec is a certain ingrained and overly defensive siege mentality when it comes to facing up to the odd soiled linen in the closet of modern Quebec nationalism.

That Quebec reflex reaction must be fading because Jean-Francois Nadeau, arts editor of Montreal’s Le Devoir, has now produced a full-scale biography of Quebec’s infamous Fascist party leader Adrien Arcand with an alluring title, The Canadian Fuhrer (James Lorimer and Company, 360 pages, $35). Publication of the book in French in 2010 marked a watershed in Quebec nationalist thinking, speaking to the previous silences in Quebec history.

Two decades ago, a feisty Quebec scholar, Esther Delisle, had paid a heavy price for exposing the first cracks in the nationalist armour. In her PhD thesis she offended many by identifying Lionel Groulx, Quebec’s modern patron saint, as a purveyor of anti-Semitism and a nationalist who was remarkably tolerant of right-wing extremism. Her 1998 book Myths, Memories and Lies went public with a shocking account of how some members of Quebec’s elite, nationalist and federalist, supported Nazi collaborator Marshall Philippe Petain and his Vichy government in France during the Second World War and then helped bring war criminals to safety in Quebec after the war ended.

Delisle was strongly chastised for speaking out and when Montreal writer Mordecai Richler took her side, she became a bête noir. After the Quebec premier’s brother Gerard Bouchard attacked her research and rose to defend Groulx against the charges of anti-Semitism, she was essentially blacklisted in French Quebec.

Nadeau’s The Canadian Fuhrer returns to the touchy subject of the emergence and persistence of Adrien Arcand and his Quebec fascist party from August 1939 until the 1960s. It’s a very thorough, authoritative biography with a title that not only projects a strong, powerful image, but conveys the author’s willingness to call a spade a spade.

As a former academic historian, Nadeau brings an impressive array of insight and talent to the task of unravelling the life of Canada’s best known fascist leader. It shows the vital importance to Arcand’s political life of being fired from La Presse for union activities and the founding of his wickedly satirical newspaper Le Goglu in Montreal’s working-class east end. After flirting with Italian-brand fascism, Arcand and his close associate Ajutor Menard chose a different path "paved with Hitler-style swastikas instead of Roman symbols of fascism."

The rise of Arcand’s movement is explained as a radical political response to the hunger, unemployment and war anxieties of the 1930s. Radical ideas gained currency among Canadians along the whole range of extremes from Communism and socialism to the right-wing variants, the Social Credit movement on the Prairies and Maurice Duplessis’ Union Nationale in Quebec. Amid such turmoil, Adolf Hitler cast a spell and one that even fooled Canada’s wily prime minister Mackenzie King.

The most alarming part of Arcand’s story is how he managed, while spouting Nazism and anti-Semitism and operating on a shoestring, to become a significant political force in Quebec throughout the 1930s. His role on the fringes of the Jeune-Canada movement founded by Andre Laurendeau and Lionel Groulx makes for fascinating reading. All of the Jeune-Canada partisans are shown to have shared anti-Semitic attitudes, but Groulx, the rather effete young nationalist, remained uncomfortable with Arcand’s distinctly working-class brand of fascism.

As a Le Devoir journalist, Nadeau is at pains to show how leading Quebec nationalists like Groulx and Jeune-Canada sought to keep a safe distance from Arcand. "Anti-Semitism and xenophobia," he writes, were integral to their thought and program but, unlike Arcand, "blood and race" was not "the primary standard by which everything was judged."

Arcand and his far-right National Unity Party did draw their strength from what is described as "the spirit of the 1930s." Once Canada declared war on Germany and Italy in 1939, Arcand was interned for his political views. After the war, he remained a committed fascist and resumed his political activities, forging alliances with Duplessis and the UN in a futile attempt to stave off so-called "Reds" like Jean Lesage and the Liberals, promoting the Quiet Revolution.

Adrien Arcand, as Nadeau points out, remained a committed fascist. He not only continued to espouse anti-Semitism but denied the existence of the Holocaust. After flailing away for four decades in the world of radical politics, Arcand was left destitute and beset by poor heath before he passed away quietly on Aug. 1, 1967.

Nadeau’s The Canadian Fuhrer will go a long way toward extinguishing the trace of stench associated with the heirs of Lionel Groulx, Quebec’s modern-day nationalists. It will quickly be recognized as the standard work on a sordid aspect of Quebec’s 20th-century history. In one particular, perhaps picayune aspect, the book falls short. It’s curious to me why this otherwise fine book contains no direct reference whatsoever to Esther Delisle, the intrepid scholar who first blasted open the larger story. When that happens, all will be well with the world.

Paul W. Bennett is founding director, Schoolhouse Consulting in Halifax, and lived in Montreal from 1997 until 2005.