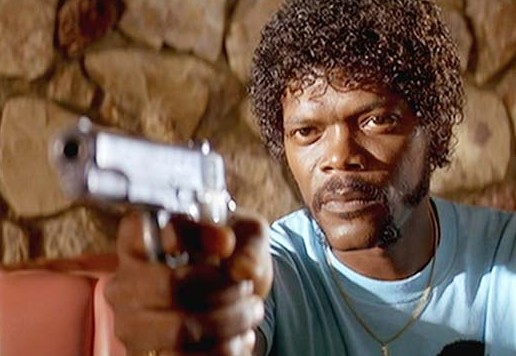 When it comes to casting your vote this November, it’s unlikely one celebrity’s opinion will sway your decision. But just in case you’d like to know which celebs align with your political beliefs, here’s one to add to your list: In an interview with the Hollywood Reporter, Samuel L. Jackson couldn’t avoid talking politics — he occasionally plays golf with Donald Trump. Jackson said Trump is running on a platform of hate, but noted that his GOPrunning mates are no better.

His presidential picks are Hillary Clinton and Bernie Sanders, but he thinks Clinton has a better shot at the White House. “I’m forever a Democrat, you know, and I’m gonna vote for Hillary,” Jackson said. “I mean, I love Bernie — Bernie’s a man of the people — but he can’t win. So I gotta cast my vote for a person that can keep those other people from winning, OK?”

Jackson added that he was confident Clinton could “hit the ground running” and start holding Congress members accountable for inaction. “And hopefully she can open up the skeletal files of those do-nothing assholes that go to work, like, four times a year and not vote on things and threaten them with whatever she and Bill [Clinton] uncovered on them years ago and make ’em do something and we can get something done,” he said. TheReporter counted this comment as a pointed slam against Sen. Marco Rubioand “other elected officials with poor attendance records.”

This isn’t the first time Jackson has voiced his political opinions. In 2013, he chided President Barack Obama for speaking in a register he thought was contrived. In his comments to Playboy, he said Obama was an educated man who purposely dropped the endings of his words to seem relatable. “Be a leader,” he continued. “Be fucking presidential.”

After the 2008 Democratic presidential primary, a Northwestern Universitystudy examined Oprah Winfrey’s endorsement of Obama, estimated her endorsement accounted for about 1 million of the president’s votes. Still, researchers said determining the correlation between endorsements and results has “historically been difficult.” More recently when 126 celebrities signed an open letter of endorsement for Bernie Sanders, it was a sign his campaign had gained momentum.