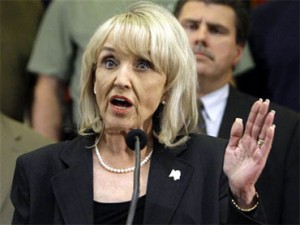 Arizona Governor Jan Brewer recently told the Associated Press that being called "Hitler's daughter" was very upsetting because "my father died fighting the Nazi regime in Germany ... " That statement has caused a flap because her father actually died more than a decade after the war ended.

Not only that, her father, Wilford Drinkwine, never left Nevada. According to a statement released Thursday to clarify her original statement, Brewer also said her father wasn't a veteran. He was a civil servant at a munitions plant but she insisted he sustained a lung disease there -- from breathing in hazardous chemicals and toxic fumes -- that ultimately led to his demise.

Brewer has been at the center of a national tug-of-war on the subject of illegal immigrants. Many hailed her for signing the controversial and tough immigration bill SB 1070. Others called it racist, or worse and have said she is moving the country towards a Nazi-like atmosphere (hence why she was called Hitler's daughter.)

She said being called that was "ugliness beyond anything I've ever experienced."

Drinkwine died in 1955 in California.

get real lady!
YOU ARE THE DAUGHTER OF HITLER!!!!
please,get your history right.Your suppose to know the end of the nazi regima in high school.