Nixon Era and US and Brazilian Imperialism Still Very Present 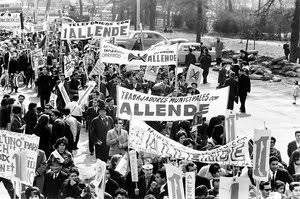 A set of documents published by George Washington University's National Security Archive on August 16, 2009, contains fresh and vivid evidence of United States actions and attitudes towards Latin America in the early 1970s.

The release of this material only a day after Washington announced an increase in its military involvement with Álvaro Uribe's Colombia is an interesting coincidence of timing that also offers a ready-made argument to those in the region, most vocally the Venezuelan leader Hugo Chávez, who contend that nothing fundamental has changed in subsequent years - not even with the election of Barack Obama.

The documents reveal that the US president Richard M Nixon (elected in 1968) worked together with the military regime that had ruled Brazil since 1964 to undermine the elected socialist leader of Chile, Salvador Allende, and other leftwing governments in Latin America. (see National Security Archive, "Brazil Conspired with U.S. to Overthrow Allende" - http://www.gwu.edu/~nsarchiv/NSAEBB/NSAEBB282/index.htm, August 16, 2009).

The value of the material lies in its detail and sense of actuality. Among the many reports is one of a White House meeting on 9 December 1971 between Nixon, his national-security adviser Henry Kissinger (who would also be appointed secretary of state after Nixon's re-election in 1972), and Brazil's hardline president, General Emílio Garrastazu Médici.

Médici expressed concern that the United States - in light of Nixon's historic opening to communist China and summit meetings with the Soviets - would modify its position towards Fidel Castro's Cuba. Nixon denied there would be any change in relation to Havana, and went on to ask Médici about the situation in Chile. Kissinger noted:

"President Médici replied that he felt that they were, adding that Brazil was exchanging many officers with the Chileans, and made clear that Brazil was working towards this end. The president said it was very important that Brazil and the United States work closely in this field. We could not take direction but if the Brazilians felt that there was something we could do to be helpful in this area, he would like president Médici to let him know".

The National Security Archive records Nixon telling Médici in the meeting: "The US and Brazil must try to prevent new Allendes and Castros and try where possible to reverse these trends." The American president also proposed to his Brazilian counterpart that they create a secret communications back-channel; Médici agreed, and named his private adviser and foreign minister, Mário Gibson Barbosa. Nixon himself named Henry Kissinger.

A Band of Brothers

This material has created great interest in Brazil. Matias Spektor, a professor of international relations associated with the Fundação Getúlio Vargas (FGV) in Rio de Janeiro, told the newspaper Folha de S. Paulo: "The documents are fascinating. They show how large was the ambition of the covert actions conducted by Nixon's administration and the Brazilian military regime in South America, and the range of issues they covered. They reveal how serious was the American expectation that Brazil would assume a more important role in the anti-communist crusade. They also demonstrate that there was a lot of suspicion on the Brazilian side that Washington would normalize its relations with Cuba; and that Médici looked for American support against the Argentineans concerning the construction of the Itaipu hydroelectric dam" (see "Médici e Nixon planejaram derrubar Allende," -http://www1.folha.uol.com.br/folha/brasil/ult96u610418.shtml - Folha de S. Paulo, August 16, 2009).

The contribution of the United States to the overthrow of Salvador Allende on September 11, 1973. is well established (see the Chile Documentation Project of the National Security Archive - http://www.gwu.edu/~nsarchiv/latin_america/chile.htm). Robert Dallek, in his fine book Nixon and Kissinger: Partners in Power, contains exemplary indications of the depth of Washington's involvement as well as the relationship between these peculiar political characters.

Dallek reveals, for example, the details of a meeting held five days after the Santiago coup d'état, when Nixon and Kissinger discussed the US involvement in the Allende's overthrow:

Kissinger: "In the Eisenhower period, we would be heroes"

Nixon: "Well, we didn't, as you know, our hand doesn't show on this one"

Kissinger: "We didn't do it. I mean we helped them, created the conditions as great as possible"

Nixon: "That is right. And that is the way is going to be played".

The US president and secretary of state had determined to overthrow the Chilean president, ignoring numerous reports from their own state department confirming that Salvador Allende posed no serious threat to the United States in the hemisphere. It is also now clear that both worked closely with General Médici, whose government is widely considered the most violent of all those during Brazil's two decades of military rule (1964-85).

The National Security Archive points out that the only documentary part of this tragic history still unavailable is in Brazil itself. Peter Kornbluh, the director of the NSA's Chile and Brazil projects, is calling on President Luiz Inácio Lula da Silva to open Brazil's military archives on the period. "The full history of intervention in South America in the 1970s cannot be told without access to Brazilian documents," he says.

The declassification of these documents is also a great opportunity to think about the image of the United States in South America. Washington's past support for violent dictatorships has certainly strengthened the anti-Americanism in the region that fuels Hugo Chávez's political engine. The Venezuelan president is very aware of this fact and seeks every opportunity - the ongoing political crisis over Honduras being just one example - to use it.

In this context, the military agreement between United States and Colombia announced on 15 August 2009 that will make seven Colombian airbases available to the American air force, is both significant and counterproductive.

The agreement may be a bilateral one between Washington and Bogota, and may not (as US secretary of state Hillary Clinton says) represent a great increase in Washington's military presence in Colombia; but its symbolism and timing (it was made public on the eve of the meeting of the Union of the South American Nations [Unasur]) strengthens Hugo Chávez's regional vision and his argument that South American nations need to arm themselves against "American imperialism".

If Barack Obama's United States wishes today to encourage moderate Brazilian rather than radical Venezuelan leadership in the region, it should at least try not to provoke unnecessary irritation among its southern neighbors. The treatment of Chile, and equally the mentalities and secrecies that underlay it, should be an awful warning.

Arthur Ituassu is professor of international relations at the Pontifícia Universidade Católica in Rio de Janeiro, Brazil. You can read more from him at his website: www.ituassu.com.br. This article appeared originally in Open Democracy - www.opendemocracy.net.

Journalists Under Seige in Brazil