(Pal Telegraph – By Stephen Lendman) This article follows an earlier one titled Death Squad Terror in Honduras, accessed through the following link: 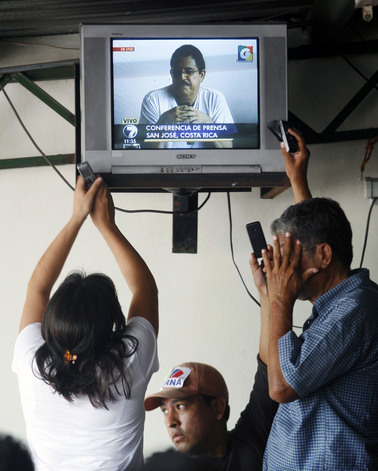 Orchestrated by Washington, it discussed the June 28, 2009 coup, Honduran soldiers arresting President Manuel Zelaya at gunpoint, exiling him to Costa Rica, obstructing his return, committing widespread killings and human rights abuses, conducting a sham November 2009 election under martial law, installing Porfirio (Pepe) Lobo Sosa president on January 27, 2010, the Obama administration's man in Honduras, succeeding interim leader, Roberto Micheletti, using death squad terror to solidify coup d'etat rule, what most Hondurans oppose and want ended.
Founded in 1981, the Committee to Protect Journalists (CPJ) is "an independent, nonprofit organization... promot(ing) press freedom worldwide by defending the rights of journalists to report the news without fear of reprisal."
On July 27, it published a special report titled, "Journalist murders spotlight Honduran government failures," saying seven were killed from March - mid-June, six during a seven week period, the "government fostering a climate of lawlessness (letting) criminals....kill journalists with impunity....assassinations carried out by hit men."
Calling them routine street crimes, Security Minister Oscar Alvarez said "there is nothing to indicate that it is because of their journalistic work," dismissing them out of hand with no investigations or prosecutions, suggesting government forces behind them silencing critics. Post-coup, state terror is official policy, especially against independent journalists, pro-democracy groups, human rights workers, campesinos and others challenging state/oligarch/drug lord power.
For their part, journalists fear the murders were "conducted with the tacit approval, or even outright complicity (on orders) of police, armed forces, or other authorities," ongoing death squad terror since mid-2009.
"You get the impression that the government wants you in terror so you don't know what to report. Is this story about drugs too dangerous? What about this one about political corruption? At the end, you don't report anything that will make powerful people uncomfortable," Geovany Dominguez explained, Tiempo newspaper's senior editor in Tegucigalpa, Honduras' capital.
CPJ found evidence that at least several killings were work related, most likely all of them, given the politically charged lawless and violent environment. An alarming pattern of impunity also was clear, evidenced by official indifference to investigate and arrest perpetrators, ones they and/or powerful interests likely enlisted. In one case, protection for a threatened journalist was denied, a TV anchor later shot and killed.
Victor Jimenez, Radio Excelsior manager in Juticalpa, expressed alarm saying:
"Narcotics gangs now are stronger than the government. The powerful families that have been running parts of this country for generations, some of the politicians who have personal power, local military leaders - all of them work outside the government's power. The government is on the margin, it has the least power," working collaboratively with gangs and oligarchs. That's why "the police and the courts don't mean a thing. The people won't talk to them; the people are afraid of the real power."
In March 2010, even the US State Department said:

"Following the June coup, there were reports that the de facto regime or its agents committed arbitrary or unlawful killings.... A small number of powerful business magnates with intersecting commercial, political, and family ties own most of the country's news media."