Suzanne Goldenberg, US environment correspondent | The Guardian| 13 May 2010 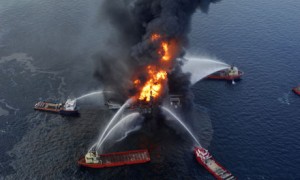 BP was aware of equipment problems aboard the Deepwater Horizon rig hours before the explosion pumped millions of gallons of oil into the Gulf of Mexico, a congressional hearing was told yesterday .

In a second day of hearings, the House of Representatives's energy and commerce committee said documents and company briefings suggested that BP, which owned the well; Transocean, which owned the rig; and Halliburton, which made the cement casing for the well, ignored tests in the hours before the 20 April explosion that indicated faulty safety equipment.

"Yet it appears the companies did not suspend operations, and now 11 workers are dead and the gulf faces an environmental catastrophe," Henry Waxman, the chair of the energy and commerce committee, said, demanding to know why work was not stopped.

The committee heard testimony from oil executives suggesting multiple failures of safety systems that should have given advance warning of a blowout, or should have promptly cut off the flow of oil.

The failures included a dead battery in the blowout preventer, suggestions of a breach in the well casing, and failure in the shear ram, a device of last resort that was supposed to cut through and seal the drill pipe in the event of a blowout.

"Already we have uncovered at least four significant problems with the blowout preventer used on the Deepwater Horizon drill rig," said Bart Stupak, a Democrat from Michigan who chairs the oversight subcommittee.

The examination was far tougher on the oil companies than the Senate hearings on Tuesday. BP also faced a financial sting as the White House asked Congress to approve $118m in recovery costs, to be passed on to the oil company.

While the committee accused the oil industry of failing to anticipate the dangers of offshore drilling, senators John Kerry and Joe Lieberman unveiled a climate and energy bill that for the first time will put a price on carbon and require American cuts in greenhouse gas emissions.

Kerry said he believed the oil spill would give impetus to the American Power Act. "This a bill for energy independence after a devastating oil spill, a bill to hold polluters accountable, a bill for billions of dollars to create the next generation of jobs and a bill to end America's addiction to foreign oil."

But after eight months of careful courtship of industry and political opposition, the bill has no Republican backers after Senator Lindsey Graham, a co-author, withdrew his support last month and the immediate response from industry groups and mainstream environmental groups was guarded.

Passage of the law is seen as crucial to a global deal on climate change. The 987-page bill was carefully positioned to secure support from industry and moderate Republicans, making the final product far weaker than environmental organisations wanted.

In response to the oil disaster, the bill moderated its original support for offshore drilling, giving states veto power over projects in waters 75 miles from their shores. States that go ahead will be able to keep a bigger share, 37%, of federal revenues from drilling.

Otherwise the bill calls for 12 nuclear plants and sets aside $2bn for research into clean coal. Greenpeace condemned it as a "dirty energy bailout", with director Phil Radford adding: "It seems that after a year and a half wrangling, the only people who can be happy with this bill are the fossil fuel industry lobbyists."

The bill aims for a 17% cut in emissions over 2005 levels, the same weak target enshrined in a bill passed by the House in June last year. But the Senate version would apply to a smaller share of the US economy. Heavy industries would not be required to cut emissions until 2016.