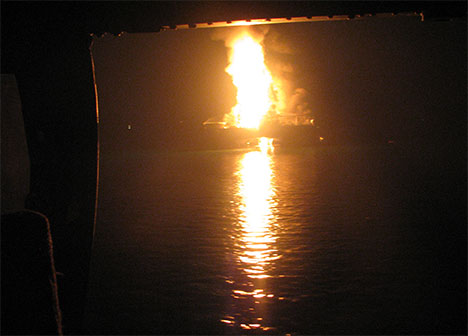 Orange Beach, Ala. —If you aren’t one of the few scattered tourists here, you’re someone who’s working your butt off. Each morning large crews gather on the beaches in plastic booties, scraping up oil from the sand hour after hour in the brutal sun, shoveling it into plastic bags. Fishermen and construction crews continue to lay boom and build temporary rock reefs in a desperate attempt to keep the oil from seeping into Perdido Bay. At night, the lights from oil skimmer boats are visible, only a few hundred yards from shore as they work round the clock.

But the oil keeps coming and the next day, everyone has to start all over again from scratch.

So it was interesting to wake up this morning and see in my email inbox that there is actually a silver lining to the Deepwater Horizon disaster. That’s right. Apparently the fact that BP can’t stop the millions of gallons of oil spewing into the Gulf of Mexico is proof that there is an unlimited supply of oil.

Craig R. Smith, the gold peddler who authored the book Black Gold Stranglehold with conservative attack dog and birther promoter Jerome R. Corsi, is taking advantage of this nation’s worst ever environmental disaster to promote his book. Black Gold espouses the baseless notion that oil is not fossil fuel after all. Rather, it’s a “bio-product of a continuing biochemical reaction below the earth’s surface that is brought to attainable depths by the centrifugal forces of the earth’s rotation.”

“This (BP) well proves our theory,” says Smith. “It would be rather ironic if this was one of the largest finds in oil history, which I think it may well be. With the flow rates of 45,000 to 60,000 barrels a day, without any pumping, this well is a gusher. I think there is at least 100 million barrels down there, and when other holes are drilled in the area, they will find a lot more. The spill . . . proves you drill deep enough you find huge amounts of oil. Therefore, Obama should abandon the pie in the sky ‘green’ economy, and spend the money for research of safe deep-water drilling.”

Wow, we’re not running out of oil after all. There’s a limitless renewable supply! Let’s get those Hummers back on the market and start stimulating the economy.

Of course, no credible scientist takes this theory seriously.

It would be nice to think that perhaps there is a silver lining to this. That Americans will finally wake up and start accepting the reality of climate change and our dwindling fuel reserves and will stop listening to crackpots like Smith. And that President Obama’s appeal to Congress for a sane Clean Energy policy will be successful.

That would definitely be a silver lining.