OAKLAND (CBS SF) – A Tuolumne County man who planned a terror attack on liberal groups faces life in prison after being convicted Monday of four counts of premeditated attempted murder of a peace officer for a shootout with California Highway Patrol offices on Interstate Highway 580 in Oakland in 2010.

Byron Williams, 48, of Groveland, who has two prior bank robbery convictions, was also convicted of three counts of being an ex-felon in possession of a firearm in connection with the 12-minute gun battle, which occurred on I-580 near the Harrison Street exit just before midnight on July 17, 2010.

Williams looked straight ahead and showed no emotion when jurors read their verdict against him today after deliberating for the equivalent of three full days. He will be sentenced by Alameda County Judge C. Don Clay on April 3.

Williams’ attorney, Eric Schweitzer, said he is “disappointed” by the verdict because he believes CHP officers, who had stopped Williams for speeding and weaving, started the gunfight by shooting Williams in the back of the head, which he said made Williams think that his life was in danger and prompted him to shoot at CHP officers in self-defense.

Schweitzer said the gun battle was “one-way for most of the time” because Williams only fired 10 shots while officers fired nearly 200 shots at him. Williams fired three shots from a 9mm handgun and seven shots from a 12-gauge shotgun, the defense attorney said.

Prosecutor Autrey James said it is not clear who fired the first shot but that he believes Williams precipitated thegun battle by pointing his gun at CHP Officer Vincent Herrick as Herrick was approaching his vehicle to question him.

James said Williams didn’t pull over when CHP officers first tried to stop him because “he was deciding what to do” and Williams admitted on the witness stand that he planned to kill Herrick. 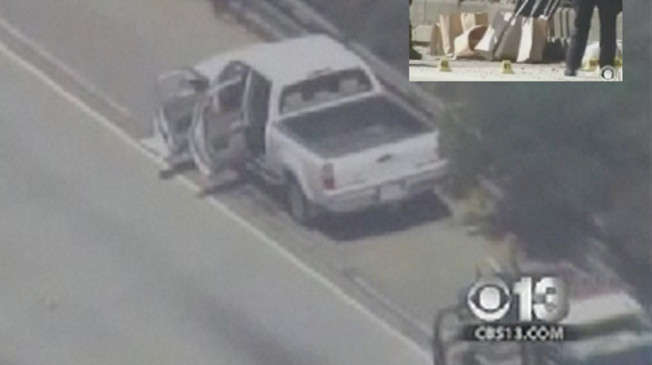 James said the jury “did a good job” in convicting Williams of all the charges against him because “the evidence supported every finding they made.”

Williams told investigators after the shootout that he had planned to start a right-wing revolution by going to San Francisco and killing people at the Tides Foundation and the American Civil Liberties Union, according to court documents.

Schweitzer argued that because Williams was focused on his mission to target liberal groups in San Francisco, it wouldn’t make sense for him to get sidetracked by a highway gun battle unless he thought his life was in danger.
Williams and two CHP officers suffered minor injuries in the shootout.

Inside the Toyota Tundra Williams was driving, investigators also found a .308-caliber rifle.
Schweitzer said he will appeal Williams’ convictions partly on the ground that he believes jurors should have been instructed that Williams suffered from “diminished actuality” because he couldn’t think clearly after he was shot.

Schweitzer also said he thinks that if Williams hadn’t been stopped by the CHP he wouldn’t actually have carried out his plan to kill people in San Francisco.

The defense attorney said that although Williams was upset about the BP oil disaster in the Gulf of Mexico, “he didn’t know who he had a bone to pick with” specifically and he told his mother in a letter after he was arrested that “I would have cooled off” in the morning.

CHP spokesman Sean Wilkenfeld said, “We appreciate all the hard work by the Alameda County District Attorney’s Office in prosecuting this case and we’re glad that no one was killed and this is finally resolved.”