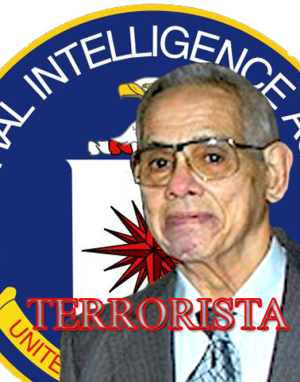 A  scandalous tribute to the international terrorist Orlando Bosch, ex-chief of the bloody Coordinator of Terrorist Organizations (CORU), an organization responsible for hundreds of crimes on U.S. territory as well as abroad, took place on October 12 at the Institute for Cuban and Cuban American Studies (ICCAS) attached to the University of Miami, an institution heavily subsidized by the U.S. Agency for International Development (USAID).
The awarding of a "commemorative plaque" to the old assassin, staged under the cover of the so-called Institute of the Cuban Historic Memory, took place in the Olga and Carlos Saladrigas Hall of the institute, whose director, Jaime Suchlicki, is a former CIA analyst.
The organizing committee for this outrageous event entitled "Cuba, the war of warriors," included Enrique Ros, father of U.S. Congresswoman Ileana Ros-Lehtinen, and various mercenaries from CIA terrorist operations perpetrated against Cuba during the period of struggle in the 1960s against armed gangs in the Escambray region of the island.
In addition to Bosch, honors were also given to Francisco Talavera, a mercenary from that episode of U.S. aggression against Cuba, which resulted in dozens of civilian victims.

The walls of the room in which the tribute to that killer took place were covered with posters bearing the name of the ICCAS and the podium itself, from which Bosch mumbled a few words of thanks, carried the name of the organization on its banner.

Jaime Suchlicki’s ICCAS is subsidized by USAID, thanks to the machinations of Congresswoman Ileana Ros-Lehtinen, who secured millions of dollars for this so-called research center, whose "staff" is confined to two people. Ros-Lehtinen got herself elected by supporting Bosch and is a rabid defender of Luis Posada Carriles and the only terrorist of Cuban origin incarcerated in the United States, Eduardo Arocena.

This institute, belonging to the University of Miami, houses the so-called Cuba Transition Project, established in 2002 thanks to the USAID checkbook under Bush, which continues contributing funds annually under the Obama administration.

Together with Luis Posada Carriles, Orlando Bosch directed the conspiracy that resulted in the sabotage of the Cubana passenger plane in 1976 off the coast of Barbados, and the death of the 73 passengers and crew.

In June of that same year he participated in the creation of CORU in Bonao, Dominican Republic. That counterrevolutionary organization, which he later headed, brought together the Cuban National Liberation Front, Cuban Action, Cuban Nationalist Movement and Alpha 66 terrorist groups, among other murder networks.

The CORU was later associated with conspiracies as repugnant as Operation Condor in South America for the purpose of disappearing political opponents to the military dictatorships in that part of the world, and lent its services to the CIA in many dirty actions in Latin America and other latitudes.

This event took place in the country that compiles lists of "sponsors of terrorism" in order to defame those who defend their sovereignty and do not submit to its orders.