Republicans are Pro-Authoritarian, not “Pro-Life” 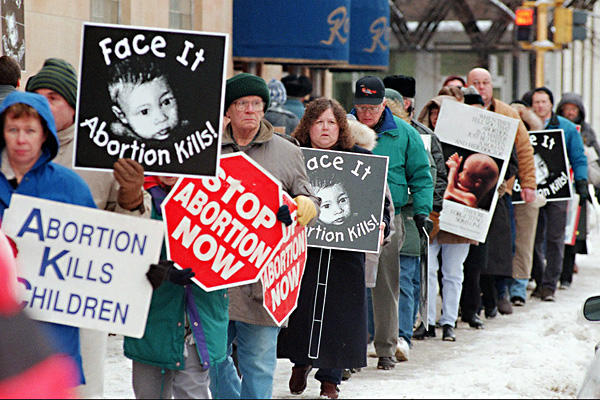 A caller to “Sound Off” really let me have it in the January 9 edition of The Telegraph. The caller would take my “droning on” seriously when I stopped “supporting the murderous Democratic Party whose policies support the largest cause of death among the black community — abortion.” It’s certainly true that the Democratic Party has taken a pro-choice stand on the abortion issue, while Republicans are overwhelmingly anti-choice. The GOP consistently claims that it favors getting the government off our backs and out of our lives. Republican politicians, however, demand that the government outlaw abortion, thereby denying American women the right to reproductive freedom of choice. Such extremism is totally inconsistent with a political philosophy that supposedly promotes small government and personal responsibility.

The “Sound Off” caller, who accused the Democratic Party of waging a Holocaust in the black community, was hardly venturing an original opinion. Republican demagogues, desperate to persuade black voters to support a party that has turned its back on civil rights, have been repeating this charge for decades. Ironically, the abortion-is-black-genocide theory was begun by leftists rather than conservatives. The Black Panthers in the early 1970s claimed that legalized abortion would “destroy our people.” Jesse Jackson, in a 1970s interview with Jet magazine, characterized abortion as “black genocide.” Jackson long ago repudiated this perspective and became pro-choice, but his quotation is still utilized by black Holocaust propagandists.

The notion that abortion perpetrates a genocide among black Americans is utter nonsense. The Conspiracy Watch of Mother Jones magazine ranks conspiracy theories on a kookiness scale of one (“Maybe they’re on to something”) to five (“Break out the tinfoil hat”). The abortion-is-black-genocide theory earned a score of five. Contrary to the extremist claim that most abortion clinics are located in black neighborhoods, the Guttmacher Institute notes that less than ten per cent are found in areas where residents are predominantly black. Extremist claims to the contrary, Planned Parenthood doesn’t encourage black women to have abortions. Unintended pregnancies occur more frequently among blacks and Latinas; hence, their abortion rate is higher than that of white women.

Founded in 1916 by Margaret Sanger, Planned Parenthood is especially loathed by anti-choice extremists, who portray Sanger as a racist intent on destroying all blacks. “There is no evidence that Sanger ever sought to kill black babies,” the Washington Post reported. When Tea Party favorite Herman Cain repeated this lie, the Washington Post gave him a four “Pinocchios” rating and stated that “it seems pretty clear that Herman Cain is spouting historical fiction.” Politifact dismissed the black Holocaust theory and noted “We found no evidence that Sanger advocated – privately or publicly – for anything even resembling the ‘genocide’ of blacks, or that she thought blacks are genetically inferior.” Yes, Sanger indeed addressed the women’s auxiliary of the Ku Klux Klan in 1926, but only because it represented an opportunity to address a group of women about birth control. Sanger later joked about the stupidity of the Klan women and recalled that she had to use “the most elementary terms, as though I was trying to make children understand.”

Republicans consistently portray the Democratic Party as pro-abortion. A recent study by the Guttmacher Institute, however, reveals that the abortion rate in 2011, during President Obama’s first term, fell to its lowest level since 1973. The study attributed this decline to increased contraception use as well as couples who decided to postpone pregnancy. The 2011 abortion rate of 16.9 per 1,000 women aged 15 to 44 contrasts sharply with the all-time high rate of 29.3 per 1,000 in 1981, when Ronald Reagan was president. Yes, the same Ronald Reagan who is so idolized by “pro-lifers.”

Contrary to the anonymous “Sound Off” caller’s accusation, the Democratic Party is not “murderous” in any sense of the term. In fact, I maintain that Democrats are indeed pro-life. Wendy Davis, Democratic candidate for governor of Texas, summed it up quite well when she observed, “I am pro-life. I care about the life of every child: every child that goes to bed hungry, every child that goes to bed without a proper education, every child that goes to bed without being able to be part of the Texas dream, every woman and man who worry about their children’s future and their ability to provide for that future.” In a Huffington Post essay titled “Pro-Life vs. Pro-Birth,” Alex Palombo castigated the so-called “pro-life” legislators who want to outlaw abortion and “are also the ones who want to cut funds to programs helping families.” These politicians, she observed, “aim to slash the budgets for SNAP, food assistance, child care credits, education and health care.”

I agree with Palombo that such zealots, who invariably are Republicans, should be called pro-birth rather than pro-life. Demanding that women bear children while creating the kind of nation where these children and their families will have a miserable, hardscrabble existence is anything but pro-life.