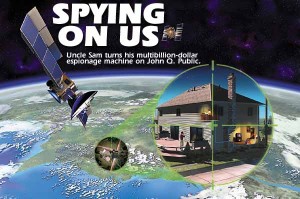 “The Obama administration heralds this local approach as a much-needed evolution in the way the country confronts terrorism.” – CBS News

WASHINGTON (AFP) — The US government is building a vast domestic spying network to collect information on Americans as part of expanding counter-terrorism efforts, the Washington Post reported Monday.

The unprecedented network involves local police, state and military authorities feeding a growing database on thousands of US citizens and residents, even though many have never been charged with breaking the law, the Post reported, citing numerous interviews and 1,000 documents ….

“It opens a door for all kinds of abuses,” Michael German, a former FBI agent at the American Civil Liberties Union, told the paper. …

The domestic apparatus includes 4,058 federal, state and local organizations, with at least 935 created since the 2001 attacks or newly focused on counter-terrorism, the paper wrote.

The FBI maintains a database of profiles on tens of thousands of Americans reported to be “acting suspiciously,” and local and state police started contributing to the files two years ago.

Some 890 state and local agencies have filed 7,197 reports, but there have been no convictions yet in any of the cases, the paper said.

Under current plans, the new Nationwide Suspicious Activity Reporting Initiative, or SAR, will ensure that a central database will one day contain files sent in by all of the country’s police departments.

The network has local police working as intelligence “analysts” without the extensive training of FBI or CIA officers.

Some police departments have hired instructors with hardline views who portray the country’s Islamic community as overrun with radical extremists, the paper wrote. …

The cost of the domestic spying network is difficult to measure, but the Department of Homeland Security has provided 31 billion dollars in grants since 2003 to state and local governments for counter-terrorism measures, including 3.8 billion dollars handed out this year.