The infamous RMR-1029 flask. Where is the B. subtilis flask?

In an article published Wednesday evening on their website, McClatchy points out yet another failing in the FBI’s Amerithrax investigation of the 2001 anthrax attacks that killed five people. The article focuses on the fact that the FBI was able to get a clear genetic fingerprint of a bacterial contaminant that was found in the attack material mailed to the New York Post and to Tom Brokaw (but not to either Senator Daschle or Senator Leahy). This contaminant, Bacillus subtilis, is used in some cases by weapons laboratories as an anthrax simulant, because its behavior in culture and in drying the spores is very similar to Bacillus anthracis but it is easier to handle because it is not pathogenic. I covered the FBI’s failure to link this B. subtilis contaminant to Ivins in this diary in February of 2010.

A key finding in the McClatchy article comes from an FBI memo they obtained:

One senior FBI official wrote in March 2007, in a recently declassified memo, that the potential clue “may be the most resolving signature found in the evidence to date.”

The genetic fingerprint of the B. subtilis contaminant, in other words, was a very definitive clue that needed to be traced to the culprit. The problem, as McClatchy points out, is that the FBI never got a match to materials from Ivins or from anyone else:

Yet once FBI agents concluded that the likely culprit was Bruce Ivins — a mentally troubled, but widely regarded Army microbiologist — they stopped looking for the contaminant, after testing only a few work spaces of the scores of researchers using the anthrax strain found in the letters. They quit searching, despite finding no traces of the substance in hundreds of environmental samples from Ivins’ lab, office, car and home.

LSU anthrax researcher Martin Hugh-Jones makes the key point in his discussion with McClatchy, in response to being informed the government tested thousands of samples for a match to the B. subtilis contaminant, “But were they thousands of the right samples?” 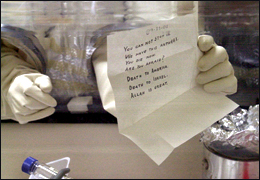 The significance of B. subtilis being present in some of the attack material cannot be overstated, especially when the FBI admits that they were able to obtain a unique DNA fingerprint of the strain that was present. As I wrote last year, I suspect that Defense Department personnel at either Dugway or Batelle cultured the material used in the attacks and noted personnel there have worked with both anthrax and B. sublitlis:

Even though Ivins can’t be linked to the particular B. subtilis strain used, there is a documented case of B. subtilis being used as a B. anthracis simulant at another facility where we already know that much of the material that went into RMR-1029 was produced. Recall from this diary that I analyzed the available information about the amount of B. anthracis used in the attacks and found it highly unlikely that Ivins could have cultured the large amount of spores used in the attacks with the equipment and time he had available. Much of the material in RMR-1029 was produced at Dugway.

On December 13, 2001, Judith Miller published an article in the New York Times, where she disclosed that “government officials have acknowledged that Army scientists in recent years have made anthrax in a powdered form that could be used as a weapon.” She further pointed out that this work occurred at Dugway in 1998. It should be noted that the anthrax produced at Dugway for Ivins that went into RMR-1029 was cultured in 1997.

The Miller article then goes on to quote scientist William C. Patrick on how he coached scientists at Dugway in drying a pound of highly purified anthrax spores in 1998. Miller quotes a Dugway spokesperson as saying a strain different from Ames (the parent of RMR-1029) was used in the drying experiments. Note that a pound of spores is enough dried spores to produce hundreds of letters with the one to two grams of dried spores thought to be in each letter. But in a further bit from the Dugway spokesperson, we have this:

She said Dugway did make one- pound quantities of Bacillus subtilis, a benign germ sometimes used to simulate anthrax.

We know that the key anthrax work at Dugway and Batelle was carried out by the Defense Intelligence Agency. I find it highly unlikely that this agency would be completely forthcoming with the FBI in sharing samples of all of the B. anthracis or B. subtilis strains in its collection, so Hugh-Jones was right to question whether the FBI tested the right samples for a match to the key B. subtilis contaminant. The fact that all of Ivins’ materials were available to the FBI, and that the FBI was able to carry out extensive environmental sampling (albeit several years after the preparation of the attack materials) where Ivins worked and lived comes very close to excluding Ivins as a suspect since the contaminant was not found in association with him.

Buried in the McClatchy article is an admission from a source close to the investigation that seems to shed some light on why the FBI continues to insist that Ivins was the sole attacker, even going so far as to concoct an after-the-fact “forensic psychiatric profile” in an effort to bolster their case:

“If they ever had any doubts, once he committed suicide, they had to unite,” this person said. “Otherwise, you’ve driven an innocent man to suicide. And that’s a terrible thing.”

Yes, driving a man to suicide is a terrible thing. But is it any less terrible to continue to insist on the guilt of a man who cannot conclusively be proven to have carried out these horrendous attacks ten years ago?

Serbs in the Service of Hitler’s Third Reich
Apr 23