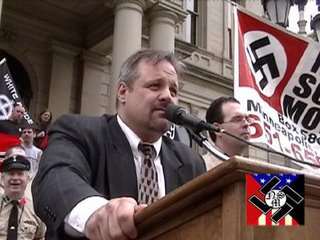 Hal Turner, a radio shock jock, was sentenced today to 33 months in prison after threatening to kill three federal judges. He weakly claimed he was ordered to say hateful things in order to draw out domestic terrorists for the FBI to capture.

Turner is no stranger to threats and demands for assassinations. After the 2006 midterm elections, Turner created a timetable warning politicians voting for amnesty of illegal immigrants that they would be targets for assassination.

The partisan divide between the left and right in politics is forever expanding. Compromises are hardly accomplished; rather, people divulge in their self-interests and scope out benefits explicitly for themselves. The big picture is rarely looked at by politicians.

Though the tea party has become a symbol of frustration for big government, the left has countered that they are nothing but racists. There is a great divide in this country; the majority of America is angry at government, for either being too big or too small.

However, Turner represents an extreme minority of people. He is clearly vicious, hateful person. He denies the Holocaust, advocates killing Jews, and opposes Israel's existence. He advocates white supremacy.

That is what a shock jock does; "shock" the audience. Of course, virtually all radio hosts don't go to this extreme. Turner wants attention; he thrives off of it. Here, he took it way too far. It is very surprising it took the law this long to toss him in prison.

But the majority of Americans do not advocate violence. Sure, there are misinformed people who believe silly things, and they probably always will, for some foolish reason or another. There will always be extremists on both sides of the political aisle; while we surely can't ignore them completely, feeding their egos is not a good idea either. Vicious extremists are best dealt with by the FBI, not granted major media exposure for the purpose of ratings.

In 2008, many thought President Barack Obama would be the great compromiser; one who would get Democrats and Republicans to talk together to form bipartisan laws. Unfortunately, that dream has become a failed promise. The result has become a partisan mess. It takes real hard work to get government operating like it should, and it likely won't ever be perfect.

While everyone is entitled to free speech, no one is allowed to incite violence on another person. The line must be clearly distinguished. And so for good reason, Turner can count his days in prison, away from the radio airwaves.

@Alex: Thanks for putting this up, btw. My Christmas Eve just got so much better. =)

@Simon: Actually, Simon you are a complete idiot. Turner’s only real role was to help the white supremacist movement grow, and even, in some cases, to encourage the assassinations of certain figures the elites would like to have eliminated………It had nothing to do with ‘Zionist imperialism'{Another Nazi myth, btw……….just like ‘ZOG’. That’s just another buzzword to distract from the REAL facts, that Israel is just another favored useful idiot for the elites…….hell, up until 15 years ago, so was South Africa!} So please, stop dragging the good name of us truth seekers thru the mud, Simon. You are doing us all a GREAT disservice.

And Turner tried to connect his hate-filled venom with mainstream criticisms of Zionist imperialism and questions about the official version of 9/11’s authenticity.

Classic example of a counter-intelligence agent attempting to drag “dangerous” causes through the mud.