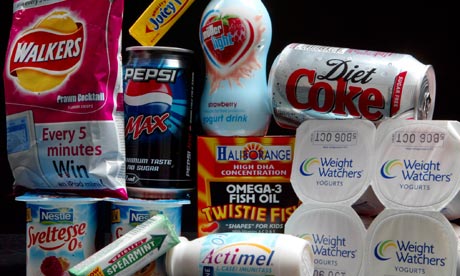 The big health news from this past week is the petitioning of the FDA by two very powerful dairy organizations, The International Dairy Foods Association (IDFA) and the National Milk Producers Federation (NMPF), to allow aspartame and other artificial sweeteners to be added to milk and other dairy products without a label.

Aspartame, also known by the brand name Nutrasweet, is made up of three components: 50% phenylalanine (a chemical that affects human brain activity by transmitting impulses), 40% aspartic acid and 10% methanol (poisonous wood alcohol).

Based on the FDA’s track record in handling the aspartame issue, things are not looking good to stop approval of this outrageous measure.

For one, back in 1996 when aspartame was first approved for use in thousands of food products, the FDA used 15 “pivotal” studies as the basis for its decision.

One of these pivotal studies involved oral dosage of aspartame to infant Rhesus monkeys for 52 weeks.   The research was conducted by the University of Wisconsin Medical Center in Madison, Wisconsin.

The high dose group ended up ingesting about the same amount as the medium dose group as the high dose monkeys would not consume intended levels of aspartame possibly because it was too sweet at that amount.   There was no control group.

The monkeys in this study were served their aspartame in an orally consumed milk based formula.

Starting about 7 months (218 days) into the experiment, ALL the medium and high dose monkeys began having brain seizures.

“All animals in the medium and high dosage groups exhibited seizure activity. Seizures were observed for the first time following 218 days of treatment… The seizures were of the grand mal type… One monkey, m38, of the high dose group, died after 300 days of treatment. The cause of death was not determined…”

The low dose monkeys might have started to have seizures as well, but the death of one of the researchers, H. A. Waisman, caused a lack of staffing for the study.  As a result, the low dose monkeys were withdrawn from the group at 200 days which is before the seizures in the medium and high dose group began occurring.

As soon as the aspartame was withdrawn from the monkey’s diets, the seizures stopped.

How the FDA could call a study “pivotal” for approving aspartame’s use in thousands of products where every single monkey suffered from grand mal seizures and one died while consuming milk based formula containing this artificial sweetener is incomprehensible.

According to Robert Cohen of Oradell, New Jersey, who rediscovered this study which was reported in 1972, the dairy formula/aspartame milk which the monkeys ingested would have been a key reason for the brain seizures.

When the stomach pH is 6, Cohen explains that the simple proteins that comprise aspartame would pass through undigested and hence move into the blood intact.

Testing of the monkeys in this study showed that there was in fact phenylalanine (which comprises 50% of aspartame) in their blood which proves that it is absorbed.  Phenylalanine affects human brain activity by transmitting impulses and the brain seizures started occurring after this compound was detected in the monkey’s blood.

With aspartame, aka Nutrasweet, already used but still included on the label of many dairy products, it’s not a big leap for the FDA to take it to unlabeled status based on the petition from Big Dairy.

This is especially probable given the FDA’s backward interpretation of the Rhesus monkey study which it called “pivotal” in proving human safety and yet all the monkeys suffered from grand mal seizures while ingesting aspartame laced dairy formula.

Sources: Aspartame in Milk Without a Label?  Big Dairy Petitions FDA for Approval

Previous Article
Over 1,100 Cases of Cancer within Three Mile Radius of Fort Detrick’s Area B
Next Article
From El Salvador to Iraq: Washington’s Man Behind Brutal Police Squads