” … The California Department of Pesticide Regulation has proposed registering methyl iodide as a pesticide in California to the dismay of scientists and environmental groups, who say it is so toxic that even chemists are reluctant to handle it. … “ 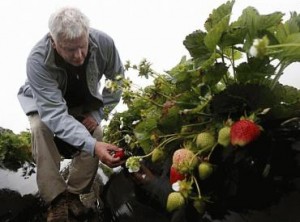 Jim Cochran of organic grower Swanton Berry Farm checks his strawberries. The state Department of Pesticide Regulation has proposed methyl iodide for use as a pesticide. Swanton Berry Farms does not use the chemical and would not do so even if its use were approved by state regulators.

Farmers planting strawberries and other crops in California will soon have to contend with cancer-causing poison instead of bugs, worms and fungus if regulators get their wish.

The California Department of Pesticide Regulation has proposed registering methyl iodide as a pesticide in California to the dismay of scientists and environmental groups, who say it is so toxic that even chemists are reluctant to handle it.

The chemical will become legal for growers to use after a 60-day comment period ending June 29 unless there is some kind of public outcry.

“This is one of the most egregious pesticides out there,” said Sarah Aird, the state field organizer for Californians for Pesticide Reform, a coalition of watchdog groups opposed to the use of potentially harmful chemicals. “It is really, really toxic. It is actually used in the laboratory to induce cancer cells.”

Methyl iodide was approved by the U.S. Environmental Protection Agency in 2007 for use as a fumigant over the protests of more than two dozen California legislators and 54 scientists, including five Nobel laureates, who signed a letter opposing registration of the chemical.

It was approved as a replacement for methyl bromide, which experts wanted phased out because its fumes waft into the atmosphere and damage the ozone layer.

Appeals have recently been made to the Obama administration to overturn the Bush-era decision.

Methyl iodide is now licensed for use in 47 states, but it is expensive and used only sparingly in Florida and the Carolinas, mostly on strawberries and occasionally on tomatoes and peppers. Eleven states have used it at least once, according to researchers. No problems have been documented, but very few studies have been conducted, Aird and others said.

California is considered a key battleground in the fight against methyl iodide because agriculture is a major part of the economy. The substance, produced by Arysta LifeScience Corp., is used primarily to prepare strawberry fields for planting because that fruit is particularly susceptible to soil-borne pests.

The stuff is normally mixed into the dirt and covered with tarps. It kills weed seeds, insects, microscopic worms, bacteria and fungal diseases that infect plant roots.

“Fumigants, including methyl iodide, sterilize soil prior to planting,” said Lea Brooks, spokeswoman for the Department of Pesticide Regulation. “It is injected into soil. It is not applied onto plants or fruit.”

Brooks said the department is aware that methyl iodide is toxic, but management concluded that it could be used safely as long as protective measures were in place. If it gets registered, she said, anyone who uses the chemical will have to set up buffer zones, limit application rates and treat only a limited amount of acreage at a time. She said California’s exposure limits are twice as strict as EPA’s.

Susan Kegley, a consulting scientist for Pesticide Action Network, a nonprofit public interest group in San Francisco, said approving methyl iodide would be a flirtation with disaster no matter how many safeguards are in place.

“This stuff just kills everything,” said Kegley, a chemist, who pointed out that even low doses have caused neurological damage and fetal death in laboratory animals. “It is a known carcinogen.”

Methyl iodide has been linked to thyroid disease, including cancerous tumors that can also affect the lungs and brain, she said. If tarps typically used to cover the treated soil were to blow off, she said, the substance could waft into the air.

“We are likely to see a greater incidence of thyroid disease with use of this chemical,” said Kegley, who wears double gloves and uses syringes, a fume hood and ventilation devices whenever she handles the chemical in the lab. “The only good thing about methyl iodide is that it doesn’t deplete the ozone layer.”

What’s really baffling, Kegley said, is that the state’s own scientists concluded that the chemical posed a potential risk to public health. The department then appointed an outside review panel, which essentially came out with the same results.

Brooks said the department incorporated many of the review panel’s suggestions in the final risk assessment.

“However, the members are experts in assessing pesticide risks, not in regulatory risk management that leads to decisions on registration,” Brooks wrote in an e-mail to The Chronicle. “Panel members were not familiar with the many options and measures that can be put into place by risk managers to avoid unsafe exposure levels.”

“This is one of these chemicals that chemists give great respect to,” Kegley said. “Allowing releases into the soil by farmers and others without training in safe handling techniques is ludicrous.”

Previous Article
Two Fake Books on the Kennedy Assassination, Ultimate Sacrifice & Legacy of Secrecy, Move the Onus from CIA to Mafia
Next Article
The Shamrock and the Swastika: Otto Skorzeny in Ireland; SS Collaborator Albert Folens