Junk food as ‘Addictive as Drugs’/Why Junk Food is Addictive 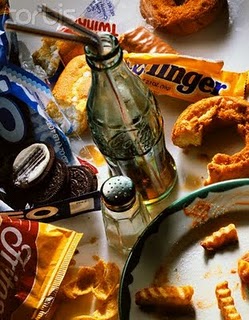 Junk food is almost as addictive as heroin, scientists have found

A diet of burgers, chips, sausages and cake will programme your brain into craving even more foods that are high in sugar, salt and fat, according to new research.

Over the years these junk foods can become a substitute for happiness and will lead bingers to become addicted. Dr Paul Kenny, a neuroscientist, carried out the research which shows how dangerous high fat and high sugar foods can be to our health . “You lose control. It’s the hallmark of addiction,” he said.

The researchers believe it is one of the first studies to suggest brains may react in the same way to junk food as they do to drugs. “This is the most complete evidence to date that suggests obesity and drug addiction have common neuro-biological foundations,” said Paul Johnson, Dr Kenny’s work colleague.

Dr Kenny, who began his research at Guy’s Hospital, London, but now works at Florida’s Scripps Research Institute, divided rats into three groups for his research, due to be published in teh US soon. One got normal amounts of healthy food to eat. Another lot was given restricted amounts of junk food and the third group was given unlimited amounts of junk, including cheesecake, fatty meat products, and cheap sponge cakes and chocolate snacks.

There were no adverse effects on the first two groups, but the rats who ate as much junk food as they wanted quickly became very fat and started bingeing. When researchers electronically stimulated the part of the brain that feels pleasure, they found that the rats on unlimited junk food needed more and more stimulation to register the same level of pleasure as the animals on healthier diets. http://www.telegraph.co.uk/health/healthnews/6451119/Junk-food-as-addictive-as-drugs.html

"The right combination of tastes triggers a greater number of neurons, getting them to fire more. ... The message to eat becomes stronger, motivating the eater to look for even more food. ... "

Why junk food really is addictive

Ice cream and chocolate bars are addictive because the mix of ingredients in them activates our "bliss point", according to Professor David Kessler, a leading scientist.

Snacks, cereals and ready meals can trigger the brain in the same way as tobacco, according to the former head of America's food standards watchdog.

Professor Kessler, ex-commissioner of the US Food and Drug Administration (FDA), claims that manufacturers have created combinations of fat, sugar and salt that are so tasty many people cannot stop eating them even when full. Living near fast food restaurants 'increases obesity risk' He argues that manufacturers are seeking to trigger a "bliss point" when people eat certain products, leaving them hungry for more. "It is time to stop blaming individuals for being overweight or obese," he said. "

The real problem is we have created a world where food is always available and where that food is designed to make you want to eat more of it. For millions of people, modern food is simply impossible to resist." While at the FDA, Prof Kessler was well known for his criticism of the tobacco industry, which he accused of manipulating cigarettes to make them even more addictive.

In a new book, The End of Overeating, he suggests precise combinations of fat, sugar, salt and texture have been used by foods manufacturers to make products "hyper-palatable". Heinz tomato ketchup and Starbucks white chocolate mocha Frappuccino are cited as examples of the thousands of modern foods that have been engineered to stimulate feelings of pleasure.

"The right combination of tastes triggers a greater number of neurons, getting them to fire more," he said. "The message to eat becomes stronger, motivating the eater to look for even more food." "Many of us have what's called a 'bliss point' – the point at which we get the greatest pleasure from sugar, fat or salt. As more sugar [and fat or salt] is added, food becomes more pleasurable until we reach the bliss point, after which it becomes too sweet and the pleasure drops off."

Prof Kessler, who ran the FDA from 1990 to 1997 and is now professor of paediatrics, epidemiology and biostatistics at the University of California, added that at the optimum point, food stimulates many people's appetites instead of suppressing it. http://www.telegraph.co.uk/foodanddrink/foodanddrinknews/5673512/Why-junk-food-really-is-addictive.html