Korbel School/Harvard-educated Chilean United Nations official Heraldo Muñoz -- formerly of the Brookings Institution, with past financial ties to the Ford and MacArthur Foundations -- led the distracting UN investigation of Benazir Bhutto's murder, wrote a book about it, blames the Pak Taleban. What’s wrong with this picture? The Munoz investigation is about as credible as the Warren Commission's, completely ignores key evidence to divert attention from the obvious: General Pervez Musharraf ordered the hit.

Testimony of witnesses close to Benazir Bhutto have said as much by relating facts on the record that lead to this obvious conclusion -  but, of course, charging him directly would dredge up the fact that Musharraf was allowed to rule (in full military uniform, the regalia of a tin-horn dictator)  after he made a secret deal with Richard Armitage, then assistant secretary of state in the Bush administration.

Trying Musharraf for murder could dredge up certain radioactive misdeeds by Armitage and others in the Bush regime, so the small matter of political murder is obfuscated by Munoz, Pakistani military and intelligence officials, the CIA and domestic press.

Should the truth peek through their smoke barrage, particularly CIA/BCCI subterfuge in giving Pakistan and other Middle Eastern countries the nuclear bomb in exchange for Cold War assistance, then the scandal would be dragged into focus with the whole world watching. Ranking American hypocrites would be implicated and perhaps indicted for illegal nuclear brokering, among other serious misdeeds. 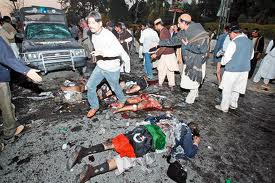 So the role of Musharraf in Bhutto's murder is handled by the media with kids’ gloves. And the prosecution is jinxed, critical evidencce suppressed. The killing  is often compared in the press to the John Kennedy assassination. Any similarities to Dallas extend to the post-mortem cover-up.

Ms. Bhutto made a reference to the nuke transfers shortly before she was assassinated. She said that a number of Pak generals were aware of the secret nuclear pact with the US.  She had been warned by Musharraf not to return to Pakistan.

The General, in an overheard phone call to Bhutto, threatened to have her murdered.

So far, the accusation in public view here in the US suggests that Musharraf had ordered her security detail to stand down. That limited hang-out alone is damning, but he was obviously a central participant in the hit.

Munoz  et al. in the bilateral national security sphere dance around the evidence to protect powerful American officials like Armitage (who has himself been involved in a score of political assassinations).

The military-industrial media, of course, and other domestic establishment media outlets, have also done much to obscure the details as a service to the CIA and Bush-era seditionists in the CIA and State Department.

It has been left to the press in the UK, specifically The Guardian – a newspaper far from the center of power, somewhat less self-censorious than any in the States – to report details of Musharraf’s complicity in the assassination bluntly and without the usual obfuscations emphasizing Taleban involvement:

Pakistan’s former military leader, Pervez Musharraf, was formally charged by a court on Tuesday with the murder of Benazir Bhutto, the ex-prime minister assassinated during a political campaign rally in 2007.

Musharraf was indicted during a short hearing at a court in the city of Rawalpindi, a move that adds to the problems facing the former president who returned from self-exile in March only to be entangled in three legal cases, barred from contesting elections and put under house arrest.

Public prosecutor Mohammad Azhar told reporters that the 70-year-old retired general was charged with murder, conspiracy to murder and facilitation of murder. …

Militant groups have vowed to kill the former army chief, who was whisked to court under heavy security, with hundreds of police positioned along his route.

Bhutto warned before her death that Musharraf should be held responsible if she were assassinated. His government was widely criticized for not doing enough to protect Bhutto when she returned to the country in 2007. …

At the time, Musharraf's government blamed the assassination on Baitullah Mehsud, the Pakistani Taliban chief killed by a US drone strike in 2009.

Heraldo Muñoz, an assistant secretary general at the UN and the chairman of a panel that investigated Bhutto's assassination, has said there was no "proof of culpability" against Musharraf. He does, however, bear "political and moral responsibility for the assassination", Muñoz wrote in an extract of soon-to-be published book about the killing.

He said Musharraf did not provide adequate security for the former prime minister.

He quotes a former Pakistani diplomat who said Musharraf taunted Bhutto, allegedly telling her: "I'll only protect you if you are nice to me." …

The national security elitists of Pakistan and the US have done their utmost to conceal radioactive evidence pertaining to the assassination. But like most CIA-Republican scandals, justice wants to be heard and will be audible eventually … years from now, after many of the witnesses have been buried, and the scabrous central participants at home and in Pakistan have been silenced by their own mortality.

The Downing of Flight 103 Over Lockerbie: Was it the Uranium?