NukeGate: The CIA, the Bomb and the Growing Threat of Nuclear Terrorism - The Constantine Report
0 SHARES

War » Nuclear weapons » NukeGate: The CIA, the Bomb and the Growing Threat of Nuclear Terrorism

In 2011, Foreign Policy published the results of a poll in which 65 top experts in terrorism were asked: “Which country poses the greatest threat to the West today?" Four of five expressed the same opinion: "Overwhelmingly, the experts selected Pakistan as the country that posed the greatest threat to the West today, and a majority also picked it as the country most likely to have its nukes end up in the hands of terrorists.” Only two experts named Iran as the West's greatest threat or nuke proliferator to terror groups.

The Global Security Newswire found that Pakistan's fissile materials have been “a leading security concern for the United States for some time. While outside experts believe it would be difficult for terrorists to seize an entire nuclear warhead, they say it would be easier for insiders working at one of Pakistan's many nuclear weapon sites to gradually smuggle out enough weapon-grade material to build a rudimentary atomic device.”

Slain PM candidate Benazir Bhutto learned the details of her own country’s nuclear capabilities, the strategic location of her own nuclear facilities, from the CIA on a visit to Washington, according to Duane Baughman, producer of the documentary Bhutto.

The Agency was well-informed about Pakistan’s nuclear capabilities because the Bank of Credit and Commerce International (BCCI), the corrupt money laundry on intimate terms with the CIA, was instrumental in shaping them. In 1981, the bank set up a phony “charity,” the BCCI Foundation, used it to shelter ill-gotten BCCI gains. Most of the money accumulated by the BCCI Foundation was “donated” to A.Q. Khan’s nuclear initiative.

The father of Pakistan’s atomic bomb began his paternity in the 1970s by stealing technology for the refinement of uranium-235 in the Netherlands while employed as a metallurgist at uranium processor Urenco. Dutch Prime Minister Rund Lubbers told the BBC in 2005 that he had sufficient evidence to have Khan arrested on an Interpol warrant in 1975, but the CIA interceded. Khan was tried and convicted in absentia on charges of nuclear espionage in 1983. The conviction was dropped on a technicality.

The Economist reports that it is unknown, “even to this day, how much Pakistan's leaders knew of the ‘nuclear Wal-Mart’ Mr Khan operated. The president, General Pervez Musharraf, is on record describing the moment the CIA handed him their detailed dossier of Mr Khan's proliferation activities, bank accounts and the like as the ‘most embarrassing’ of his life—but whether because he knew and had been caught out, or because he was unaware of the scale of Mr Khan's nuclear state within a state, he isn't saying.” 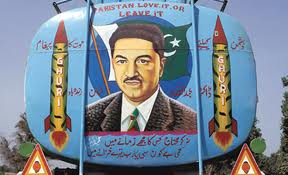 The CIA was aware of Khan’s prominence in the nuclear black market, yet his network was allowed to flourish. Intelligence concerning Iran’s secret nuclear program, and Libya’s, finally “brought Mr Khan down with a thud. But the damage he did was irreparable. Before his fall, he had been lining up a fourth (so far undetected) big customer for his full-service bomb-building package.”

The Kahn distribution network, spanning “companies in at least a dozen countries,” was coordinated by a front company in Dubai. Much of the technology in the supply chain is still unaccounted for. “So are electronic copies of detailed, e-mailable designs for a uranium-enrichment plant. Mr Khan provided Libya with a virtually complete bomb design (given to Pakistan originally by China in its irresponsible days); were North Korea and Iran, and possibly others, sold that too? By turning the bomb into a marketable commodity, Mr Khan and his network helped sweep away the barriers to entry into the nuclear business. Parts of the network have been shut down. Others are still operating. And, as with any profitable venture, there will be imitators.”

Nuclear proliferation in the Middle East continued apace while the CIA watched -- and covertly assisted – because Pakistan played a significant role in the Cold War. “Pakistan was a frontline state in the East-West confrontation,” Greenpeace notes in a report on the Khan network. “It was not in the interests of the West to confront Pakistan.” The country was “an important strategic asset for the US as a counter to post-revolutionary Iran, communist China, and in the ‘80s the Afghan insurrection against the Soviets. Even Iraq was “given maximum leeway in arming itself for the 1980-88 war with Iran. The US countered the growing Iranian influence in the region by supporting Iraq in its invasion. … This support extended to the export of sophisticated weaponry to Iraq, including the technology that country needed for its nuclear weapons program.”

Khan was not, as the press would have us believe, merely a rogue agent. He was a vital chess piece in the CIA’s geopolitical aims.

And it was a very dangerous game, as the New York Times reported on June 16, 2008: “Four years after Abdul Qadeer Khan, the leader of the world’s largest black market in nuclear technology, was put under house arrest and his operation declared shattered, international inspectors and Western officials are confronting a new mystery, this time over who may have received blueprints for a sophisticated and compact nuclear weapon found on his network’s computers.”

“Working in secret for two years, investigators have tracked the digitized blueprints to Khan computers in Switzerland, Dubai, Malaysia and Thailand. The blueprints are rapidly reproducible for creating a weapon that is relatively small and easy to hide, making it potentially attractive to terrorists. The revelation this weekend that the Khan operation even had such a bomb blueprint underscores the questions that remain about what Dr. Khan … was selling and to whom.”

In January, the Nuclear Threat Initiative (NTI), a watchdog group, reported that the new, compact nuke design was sought  by Indian terrorists: “The head of an Indian terror group reportedly has admitted to authorities that he wanted his superior in Pakistan to provide a compact ‘nuclear bomb.’ Indian Mujahideen leader Ahmad Zarar Siddibappa, also known as Yasin Bhatkal, has been in Indian custody since his arrest in late August. The terrorist commander and bomb expert told officials that he earlier asked in a phone conversation with his Pakistan-based superior, Riyaz Bhaktal, if he could be given an atomic device. … Bhatkal reportedly said Riyaz told him ‘anything can be arranged in Pakistan.’

The Indian Mujahideen is believed to have a close alliance with the Lashkar-e-Taiba, the Pakistani-based group behind the November 2008 terror attacks on Mumbai. Should the group lay hands on weapon-grade materials from Pakistan, the result would be catastrophic.

On September 4, 2013, the Pak press published a summation of an American intelligence report on the country’s nuclear weapons program. “Pentagon and CIA have focused on Pakistan’s nuclear facilities that might come under attack by TTP [the Pakistani Taliban] and other extremist organizations.

In October, 2013, Pakistan’s Daily Times posited that nuclear power plants  and uranium enrichment facilities “may, at any time, come under potential attack from the TTP and its allies as they have already established a strong network within the headquarters of the armed forces. The possibility of a nuclear attack might be of several types -- a commando type attack that might cause widespread dispersal of radioactivity, aircraft crash into an atomic reactor and cyber attack. All would be disastrous. After several incidents of terror attacks on Pakistan nuclear facilities (Wah, Kamra, Dera Ghazi Khan, Sargodha), it became clear that the TTP and other extremist groups can gain access to nuclear facilities with the help of their radicalized allies in the armed forces. In December 2011, an article in Atlantic Magazine labelled Pakistan as the ‘ally from hell.’ The article warned that Pakistan was transferring its nuclear weapons from one place to another in very low security vans to hide them from CIA. The inability of Pakistani armed forces was evident from the fact that instead of transferring nuclear weapons in armoured vehicles, they were shifting them in unsafe vans.”

The Cold War that motivated the CIA to give a nod-and-wink to A.Q. Khan and his atomic collaborators has shrunk into the past. But a far more disastrous hot war may well hang on the horizon.