“… Allegations that the US had pressured Switzerland to bury the case against the Tinners surfaced in 2008, after the Swiss government ordered 100 pages of evidence against them to be shredded. Copies of the documents have since reappeared. …” 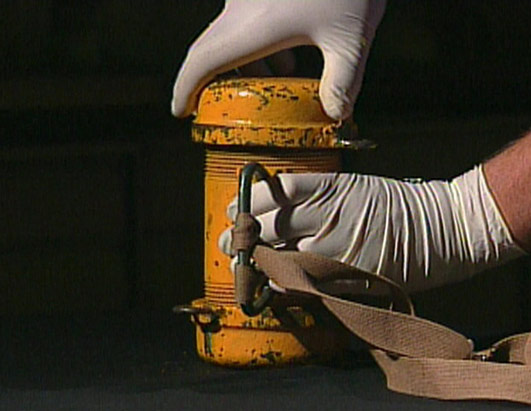 A judge yesterday called for the prosecution of three Swiss engineers suspected of smuggling nuclear weapons technology following allegations that the US pressured Switzerland to destroy incriminating evidence to conceal their work for the CIA.

Swiss federal magistrate Andreas Mueller made his recommendations at the end of a six-year investigation into the activities of engineers Urs Tinner, his brother Marco and their father Friedrich, who were arrested in 2004 on suspicion of smuggling but later released. They said they had worked for the CIA since 2003 as informers.

The three are suspected of supplying technology to a nuclear smuggling ring in Pakistan run by Abdul Qadeer Khan, a nuclear scientist reputed to be the “father” of Pakistan’s atomic bomb. Mr Khan, who now lives under government surveillance in Pakistan, is suspected of having aided Iran, Libya and North Korea with uranium enrichment programmes.

The Tinners are alleged to have played a bizarre dual role as nuclear weapons smugglers who at the same time worked for the CIA as informers and banked on the agency’s protection. “There are many parts,” Mr Mueller said yesterday. “It’s like a puzzle and if you put the pieces together, you get the whole picture.”

But they claim not to have known that Mr Khan’s aim was to produce nuclear weapons and they deny having supplied him with the relevant technology.

Allegations that the US had pressured Switzerland to bury the case against the Tinners surfaced in 2008, after the Swiss government ordered 100 pages of evidence against them to be shredded. Copies of the documents have since reappeared.

On the CIA’s destruction of evidence:

Down the nuclear rabbit hole

The damage done by rogue Pakistani scientist A.Q. Khan’s network show that nations must put aside their individual interests to stop proliferation.

Seven years after the U.S. government proclaimed victory over the rogue Pakistani scientist A.Q. Khan, the seeds of catastrophe he sowed are still sprouting worldwide. Iran’s march toward an atomic bomb? We have Khan’s nuclear trafficking network to thank. North Korea’s continuing development of nuclear weapons? Again, Khan’s doing.
Despite putting the world’s most dangerous weapons in the hands of the world’s most dangerous regimes, not one participant in Khan’s network is in jail today. Even the mastermind himself, too powerful for his own government to imprison, was allowed the comfort of house arrest, and now even that has ended. Instead of a strong message of deterrence, shutting down the atomic bazaar resulted in an unseemly mercy for its perpetrators and a new form of cyber proliferation.

By its nature, nuclear trafficking crosses borders. Combating this danger requires international cooperation. Yet at every turn in tracking the Khan network from Pakistan to Iran, North Korea and Libya, national interests trumped counter-proliferation objectives. Decisions by policymakers and intelligence officials in several nations created a calculus in which selling the means to wipe out a city carried less risk of severe punishment than robbing the neighborhood convenience store.

The worst scofflaw was our own Central Intelligence Agency, aided and abetted by senior officials in the George W. Bush administration. Together, they advocated obstructionism masquerading as prudence, blocking prosecutions and orchestrating the destruction of evidence detailing the full extent of the damage to our security by the Khan network.

Khan’s indulgent treatment is well known. Less attention has been paid to the leniency granted his collaborators. None spent more than 4 1/2 years in prison; most served far less. The logistics chief, B.S.A. Tahir, was arrested by Malaysian authorities in late 2003, but he was never charged and walked free in June 2008. Tahir might have helped put a number of his associates behind bars, but the Malaysians refused to let him testify in Germany and South Africa. Similarly, German and South African prosecutors squabbled over evidence and witnesses, leading to light or suspended sentences for four ring members in those countries.

But the most flagrant effort to undermine prosecutions was a four-year campaign by the U.S. government to kill a Swiss investigation of the network. Interviews and previously undisclosed documents we reviewed in writing our new book provided a chilling portrait of American bullying at the highest levels to block a criminal inquiry of three Swiss citizens who were part of Khan’s global enterprise: engineer Friedrich Tinner and his sons, Marco and Urs. The Americans stonewalled Swiss requests for help and then pressured them into destroying a staggering quantity of evidence.

Senior CIA and Bush administration officials argued that stopping the Tinner inquiry and destroying the evidence was necessary to protect U.S. intelligence operations and keep nuclear information away from terrorists. But our research uncovered more sinister motives.

For one, according to confidential documents, the CIA had paid the Tinners huge sums and wanted to protect their role in bringing down Khan. The CIA also wanted to stop Swiss plans, documented in a parliamentary commission report, to prosecute six of its officers who violated Swiss law by recruiting the Tinners and improperly searching their homes and offices. More important, preserving Bush’s claim that shutting down Khan was a major intelligence victory meant suppressing the disclosure of the real volume of nuclear secrets the network had put on the open market — much of it after the CIA penetrated the ring.

In February 2008, documents show, the Swiss succumbed to U.S. pressure and destroyed a huge cache of evidence seized from the Tinners. Among the material shredded, crushed and incinerated under CIA supervision were plans for two nuclear warheads from Pakistan’s arsenal, blueprints for uranium enrichment plants and producing nuclear weapons, and decades of records detailing network transactions.

For the last 2 1/2 years, a dogged Swiss magistrate has been reassembling fragments of the evidence case, and he recently recommended charging the Tinners. But the case against the CIA agents has gone up in smoke, as has the road map to outposts in the Khan network that remain undiscovered today.

The destruction was not only wrong, it was too late. Long before the Swiss seized the cache from the Tinners, the warhead plans and other designs had been transferred to digital formats, easily sent to any computer. Copies were found in Thailand, Malaysia and South Africa; no one is sure where else they may have gone in what we regard as the world’s first example of cyber proliferation. …

Previous Article
The Neo-Nazi Creativity Movement Is Back
Next Article
The Biggest Political Scandal of the Past Decade: Lockheed/Sandia, Bush’s State Dept., Pakistan’s Nuclear Smuggling & the Hidden Parapolitics of the Plame Scandal