Reflecting on discussions with the audience at the screening of a documentary about the assassination of Congo's first prime minister Patrice Lumumba, Cameron Duodu shares a less known fact that 'the fiery politician was also as very good poet.' 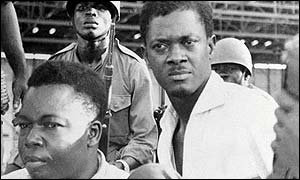 On 18 April 2011, I had the opportunity to watch in London, a brilliant film, 'Political Assassination, Colonial Style', which sketched the background to the conspiracy that led, on 17 January 1961, to the murder of the Congo's first Prime Minister, Patrice Lumumba.

To know the basic facts about Lumumba's murder is one thing, but to be shown the place where the foul deed was done, and to hear from the lips of the murderers themselves, how they did it; to see the bullet holes in the tree that served as the execution block - was a very surreal experience. Were those decrepit men with discoloured skin talking about a fellow human being or a mere object?

The film enabled one to fully comprehend the utter callousness which marked Belgian rule over the Congo for a hundred years before the Congo obtained its independence in 1960. And it also exposed the emptiness of the avowals of the United States, which claims to be a promoter of 'democracy' around the world.

Lumumba's case was clear - the Belgians wanted to reimpose colonialism on his country only days after it had been proclaimed independent. To achieve their objective, the Belgians had, wittingly or unwittingly, provoked a mutiny in the Congolese army, known as the Force Publique. To quell the mutiny, the Belgians had flown in paratroopers who were bent on preventing the Congolese government from functioning.

Perhaps naively believing the American propaganda that because the USA had fought against a European power, Great Britain, for its own independence - achieved in 1776 - the USA was 'sympathetic' to the struggle of the African people to rid themselves of European imperialism, Lumumba requested the USA to send troops into the Congo to expel the Belgians. The USA rejected Lumumba's appeal and advised him to turn to the United Nations instead.

Meanwhile, the physical safety of Lumumba and his government was threatened daily by the Belgians and their Congolese stooges. So Lumumba asked the Soviet Union for assistance to ferry troops from his Congolese citadels to the capital, Leopoldville, (now Kinshasa) where his enemies largely held sway. The Soviet Union agreed and sent Lumumba some planes.

But the USA, which had rejected Lumumba's plea for assistance, now stationed secret agents at Leopoldville airport, counting the number of Soviet personnel who were arriving in the Congo. On the basis of these headcounts - no doubt exaggerated - Lawrence Devlin, the CIA station chief in Leopoldville, sent alarming reports to Washington, claiming that Lumumba had placed the Congo in the situation of a 'classic Communist takeover'!

At the height of the Cold War, such a report was incendiary and the very President Dwight Eisenhower who had coldly pointed Lumumba in the direction of the United Nations (though he of course knew that the UN had never moved fast enough to effectively solve any international crisis before it became dangerous) now communicated word to the director of the CIA, Allen Dulles, that Lumumba must be eliminated. This was done in such a way as to ensure what the CIA calls 'plausible deniability'.

But according to a BBC report, in August 2000, Lawrence Devlin obtained 'confirmation' that the order for Lumumba's elimination had indeed come from President Eisenhower himself.

Obeying those orders, Allen Dulles did send a very sinister man, Dr Sydney Gottlieb (who is described as the CIA's 'Official Poisoner') to the Congo to try and kill Lumumba. Not even Lawrence Devlin was told his true identity: Devlin was only told to prepare to meet 'Joe from Paris'.

Said Lawrence Devlin: 'I recognised him [Gottlieb] as he walked towards my car, but when he told me what they wanted done I was totally, totally taken aback'. Monsieur 'Joe from Paris' had brought with him, a special tube of poisoned toothpaste. He told Devlin to clandestinely get the toothpaste into Lumumba's bathroom!

'It would put the man away', recalled Devlin. But the plotters could not find anyone to bribe to put the toothpaste into Lumumba's bathroom. 'I threw it in the Congo River when its usefulness had expired,' Devlin later claimed.

If you get a chance to watch this film, don't miss it: Definitely it is one of the most powerful expositions of imperialist amorality, at its crassest, that you can come across. The murderers confess the deed, but they don't express any regret - even at a time so far removed from the date of the crime - when their interviewer gives them a direct opportunity to do so. The official edition of the film can be found here. But there are versions of it, showing similar clips, on youtube.com.

At the end of the film, Pambazuka News editor-in-chief, Mzee Firoze Manji, and I were invited to say something about the subject matter. Mzee Firoze passionately urged Africans to seek to achieve the real democratisation of their societies. They should recognise what he denounced as 'the cretinous' parliamentary system inherited from the colonialists, which cannot even attempt to meet the true socio-economic problems of Africa.

I had earlier pointed out that under the colonial laws bequeathed to Africa, only people able to write and read a colonial language are eligible for election to Parliament in many African countries. This means that the 'illiterate' people, who had acted as family 'elders' in their societies - solving their people's personal problems and ensuring that their societies survived both natural and political catastrophes (like colonialism) - were taken out of the equation when it came to ruling a 'modern' state.

Only literate lawyers ('who spoke Latin'), teachers, clerks and commercial operators, all of whom had an axe to grind, were allowed near the new political administrations of their countries. Was it any wonder that many African countries were being so corruptly - and selfishly - governed that their societies at large were treading water? I asked.

Returning to the Lumumba issue, I remarked that although he only ruled the Congo for a few weeks - between July and November 1960 - yet here were we, commemorating his murder a good 50 years ago. Even Jesus Christ had been allowed three years in which to deliver his message to the world. Lumumba had not been dealt even such a hand, but in the little time he had had, he had done no evil against anyone, but had only stood up to represent the true interests of his country and the continent of Africa. Because of these ideas he espoused, his image could never be exterminated.

I then shared with the audience, a poem by Lumumba that I had discovered: How many people realise that Lumumba the fiery politician was also as very good poet who was welcomed as an évolué (evolved person) before he went into politics?

Here is the poem: it is very powerful indeed, with class and race imagery that for the time, was exceedingly brave:

O you, whose dust hurricanes have scattered all over the vast earth,

You, by whose hands the pyramids were reared

In memory of royal murderers,

You, rounded up in raids; you, countless times defeated

In all the battles ever won by brutal force;

You, who were taught but one perpetual lesson,

One motto, which was--slavery or death;

You, who lay hidden in impenetrable jungles

And silently succumbed to countless deaths

Under the ugly guise of jungle fever,

Or lurking in the leopard's fatal jaws,

Or in the slow embrace of the morass

But then, there came a day that brought the white,

More sly, more full of spite than any death.

Your gold he bartered for his worthless beads and baubles,

He raped and fouled your sisters and your wives,

And poisoned with his drink your sons and brothers,

And drove your children down into the holds of ships.

'Twas then the tomtom [drum] rolled from village unto village,