Even after the Kimberley Process banned diamond imports from the Central African Republic last year, the country exported an estimated 140,000 carats worth $24 million, according to a November 5 Reuters story. As violence escalates again, a UN panel wants mining sites monitored by troops and drones.

Following an outbreak of sectarian fighting in late 2012, Muslim Seleka rebels established regional strongholds. Between December 2013 and last August, about 3,000 people were killed amid reports of looting, kidnapping and rape. Mining licences and commodity taxes help fund the carnage, the UN found.

About 8,000 peacekeepers out of a 12,000-strong commitment are currently deployed in the CAR, Reuters added.

Diamonds are a rebel’s best friend in CAR, as armed groups smuggle blood diamonds and trade them for arms.—Sasha Lezhnev,

In August at least 25 illegal miners died after an open pit collapsed at or nearAXMIN Inc’s (TSXV:AXM) Passendro gold project in the south-central CAR. It was the second such accident in the area since June 2013, when at least 37 people died. AXMIN had already suspended its exploration and pre-development work at the location, declaring a force majeure in December 2012.

“The victims of the deadly collapse were artisanal miners, who use their hands and cheap tools to dig minerals out of the earth in illicit operations that help finance the violent conflicts in the war-ravaged country,” the Globe and Mail reported. 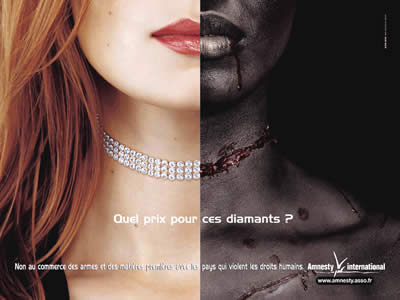 A May report from the Enough Project blamed illicit diamonds, oil and ivory for funding weapons, fuel and poaching equipment.

CAR diamonds “are sold to traders in the Darfur region of Sudan, as well as Chad, Cameroon and the Democratic Republic of Congo,” the report stated. “The traders circumvent the international Kimberley Process certification scheme and [the diamonds] are likely sold on the world market in the United Arab Emirates, Belgium, India, South Africa, Saudi Arabia and Qatar.”