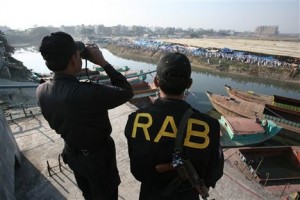 The British government’s links to notorious Bangladeshi counter-terrorism unit, the Rapid Action Battalion, extend to information sharing that may amount to complicity in the torture of British nationals on Bangladeshi soil, according to a Guardian report released on Tuesday.

The report alleges that British officials passed information about British citizens to Bangladeshi security forces, and then pushed for intelligence from their Bangladeshi counterparts while detainees were held at an interrogation centre widely renowned for its use of torture.

The Guardian’s report comes less than a month after Wikileaks cables from the United States’ embassy in Dhaka revealed that the UK government had provided training to RAB, described by human rights organisations as “a government death squad,” in “investigative interviewing techniques” and “rules of engagement,” as recently as October 2010.

According to unnamed sources quoted in the Guardian, exchanges of intelligence took place between British and Bangladeshi security officials under the auspices of protecting the UK from terrorist attacks plotted in Bangladesh. Following these discussions, at least twelve dual-nationality British-Bangladeshis were investigated by Bangladeshi government security forces, and an unknown number tortured.

The report mentions one meeting between then Home Secretary Jacqui Smith and senior officials from the Directorate-General of Forces Intelligence (DGFI), Bangladesh’s notorious intelligence agency, in which Smith emphasised the threat posed by dual-nationals and urged the agency to investigate a number of specific individuals. It also names three British-Bangladeshi men who were allegedly tortured in the Task Force for Interrogation (TFI), a Dhaka interrogation centre infamous for its use of torture. According to unnamed sources in the security forces, interrogation of all three was conducted at the behest of British security agencies MI5 and MI6.

Jacqui Smith, her successor at the home office, Alan Johnson, and David Miliband, then foreign secretary, refused to answer the Guardian’s questions about specific incidents. The British high commission in Dhaka has rejected the allegations, stating that “our security cooperation with other countries is consistent with our laws and with our values.” High Commissioner Stephen Evans acknowledged that British and Bangladeshi intelligence agencies cooperated in certain areas, “which includes sharing of information which may be relevant to the security of either country,” but added that “we take all allegations of torture and mistreatment very seriously.” The report was also dismissed by RAB spokesman Commander Mohammed Sohael “fake and baseless.”

The openSecurity verdict: The Guardian’s allegations are disturbing in the extreme but sadly not surprising. Also unsurprising are their quick rebuttals by the Dhaka high commission, and the refusal to comment of all British ministers (allegedly) involved.

Despite the in-depth investigation conducted by the Guardian, the extent or nature of British involvement in ‘information sharing’ with Bangladeshi intelligence and security agencies such as the RAB and DGFI (and therefore their complicity in mistreatment of detainees) is not yet clear – and sadly may never be. .... CONTINUED