A Seriously Insane Federal Trial, Even By Miami Standards 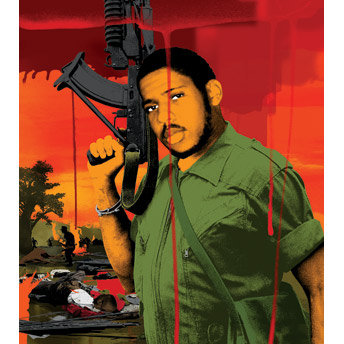 From Panamanian dictator extraordinaire Manuel Noriega to countless drug warlords to what seems like half of the city’s politicians, Miami is justly famous for having the most twisted federal trials in the nation.

It’s already clear after opening statements in downtown Miami this morning that we can comfortably add the trial of Charles “Chuckie” Taylor Jr. to the pantheon of too-crazy-to-be-made-up cases held in our fair city.

The son of Charles Taylor, the despotic SOB who tore Liberia to pieces and is on trial in the Hague for war crimes, Chuckie Taylor led his dad’s horrifically violent security team known as the “Demon Forces.”

The list of crimes allegedly ordered by Chuckie Taylor, according to prosecutors during this morning’s opening statements, are disgusting enough to make Charles Manson lose his breakfast: cutting off one man’s penis and throwing him in a ditch, burning victims with molten plastic, shocking genitals with cattle prods, beheading another man with a knife.

But the most made-for-TV part of the story, as detailed in a great Rolling Stone profile this month, is Chuckie’s childhood. In less than a decade, he went from wannabe rapper in suburban Orlando and Evans High School to speeding around Monrovia in a custom Hummer and gunning down civilians at will with automatic weapons.

If all that’s not juicy enough for ya, the case also marks the first time a U.S. citizen has been charged with torturing others abroad under a 1994 law. Given our own government’s recent history of waterboarding, sleep-depriving and maybe-torturing, the trial is stirring up interest around the globe.

Who is Charles “Chuckie” Taylor, Jr.?

… Shortly after Charles Taylor, Sr. took office, he established the Anti-Terrorist Unit (ATU), an elite pro-government military unit. Taylor, Sr. appointed Chuckie Taylor to head the unit, which he did throughout most of his father’s presidency, from 1997 to 2003.

Taylor, Sr. is currently on trial in The Hague, charged with war crimes and crimes against humanity committed in neighboring Sierra Leone. It is the first international war crimes trial of an African president and is being conducted by the United Nations-backed Special Court for Sierra Leone. The charges against Taylor are based on his alleged role as a major backer of rebel forces in Sierra Leone and on his alleged responsibility for Liberian forces fighting in support of the Sierra Leonean rebels. …

Previous Article
Andy Martin: The Man Behind the Whispers About Obama
Next Article
Nuremberg Trials: Big Pharma’s Crimes Against Humanity