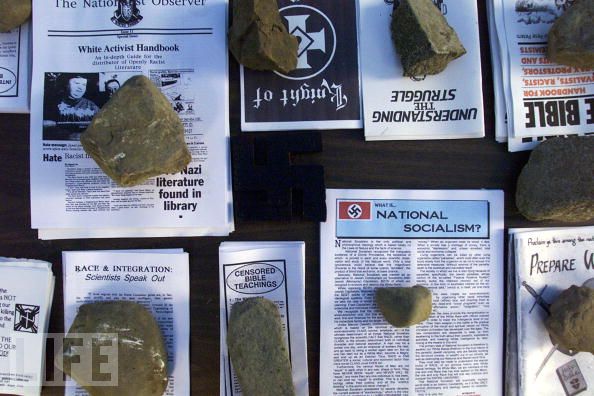 Grant County residents turned out in force at a town hall meeting this morning to object to efforts by a white supremacist group calling itself the Aryan Nations to establish a new headquarters in John Day.

"Never have I been to a community who reacted so quickly as you have to say no," civil rights activist Tony Stewart, 68, of Coeur d'Alene, Idaho, told the standing-room-only crowd of about 375 people at the Canyon City Community Hall, just south of John Day. At least 100 others were turned away because of fire regulations.

"It gave this community a chance to put a voice to its values," Callister said. "That's powerful."

Stewart was joined by Coeur d'Alene attorney Norman Gissell. The two men helped win a landmark judgment in 2000 against the Aryan Nations, a group in Hayden Lake, Idaho, led by Richard Butler, who has since died.

Earlier this week, dozens of residents walked downtown John Day carrying signs against the supremacist group in response to a visit last week by Paul R. Mullet of Athol, Idaho. He identified himself as the hate group's national director and told residents he was in the county to look at properties for what he said was planned to be a neo-Nazi headquarters.

Stewart said: "If they do come, they won't have any success. This community has sent a message."