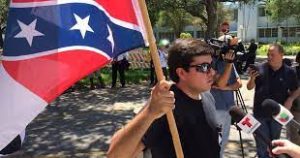 Christopher Monzon The Florida Republican Party paid thousands of dollars over the summer to a far-right activist who attended the white nationalist “Unite the Right” rally in 2017 and later charged at a crowd of anti-racist demonstrators with a Confederate flag. Christopher Monzon was paid more than $10,000 by the party between June and September, federal campaign finance records show. Neither Monzon nor the Florida GOP responded to HuffPost’s request for comment about the payments.

Monzon was in the news Monday after Sen. Marco Rubio (R-Fla.) tweeted that “one of our canvassers” had been attacked in Hialeah — a conservative and predominantly Cuban-American city in Miami-Dade County — “by 4 animals who told him Republicans weren’t allowed in their neighborhood.” Several prominent Republicans quickly latched onto the story, including Rep. Matt Gaetz (R-Fla.) and Sen. Ted Cruz (R-Texas), who tweeted, “Violence has NO PLACE in politics.”

A police report confirmed an attack had taken place. However, it listed only two perpetrators, one of whom was arrested, and did not mention any potential political motivation. A Hialeah Police Department spokesperson told Local 10 News, Miami’s ABC affiliate, that there was “no indication” as of Monday afternoon that the attack was politically motivated.

According to the police report, which cites the victim’s statements, Javier Jesus Lopez, 25, slammed a man to the ground and punched him in the face after confronting him for passing out fliers in the neighborhood.

An anti-fascist Twitter account, Miami Against Fascism, first said it had identified the alleged victim as Monzon, and the Miami New Times confirmed his identity a few hours later. Rubio’s campaign subsequently told The Miami Herald that Monzon was canvassing for the Republican Party of Florida, not the senator’s campaign.

The New Times reported that it attempted to interview Monzon in the hospital with the approval of the hospital’s media department, but that it was unable to do so because “former and current members of the Vice City Proud Boys were at the hospital and refused to grant entry to the room.”

Federal campaign finance recordsshow seven bimonthly payments of $1,483.34, labeled “payroll,” were made to Monzon between June 29 and Sept. 30, as were two other payments totaling $115.56 for “travel & meals - GOTV,” likely a reference to “get out the vote” efforts.

The address listed for the five most recent payments matches the address Monzon used on local campaign finance filings when he unsuccessfully ran for Hialeah City Council in 2021.

A video from the deadly 2017 rally in Charlottesville shows Monzon wearing a T-shirt for the white supremacist group League of the South. “I intend to stand for the South and die for it if need be,” Monzon says in a Southern drawl. In the video, he’s wearing a helmet and holding a flag bearing both the Confederate stars and bars and the League of the South’s black cross symbol.

“They will not replace us,” Monzon says — a reference to the “great replacement theory,” the fascist and antisemitic belief that Jews are importing immigrants into Europe and North America in order to hasten the end of the white race.

Monzon made his statement near a statue of Confederate Gen. Robert E. Lee while standing among members of the Ku Klux Klan, the neo-Nazi National Socialist Movement and the “alt-right” group Identity Evropa in what amounted to the largest white supremacist gathering in a generation.

He and his fellow rally attendees terrorized Charlottesville for two days, chanting “Jews will not replace us” and attacking counter-demonstrators. Eventually, a neo-Nazi named James Alex Fields Jr. drove his car into a group of counterprotesters, killing 32-year-old Heather Heyer.

Like Monzon, some white supremacists who marched in Charlottesville eventually found entrée to GOP circles. In Washington state, James Allsup was elected to a county Republican committee (and was later pushed out). In Idaho, a county Republican committee endorsed Dave Reilly, who once said “all Jews are dangerous,” for a local school board seat. And earlier this year, white nationalist Nick Fuentes hosted a conference that drew prominent Republican speakers including Rep. Marjorie Taylor Greene (R-Ga.).

A few days after the Charlottesville rally, Monzon was arrested in Hollywood, Florida, after he charged a crowd of demonstrators who’d gathered to advocate for changing street names that honored Confederate generals. Monzon briefly wielded what appeared to be the same flag he had in Charlottesville like a spear before being tackled by police, video showed. He eventually pleaded no contest to an aggravated assault charge and was placed on probation.

Monzon, who has called himself the “Cuban Confederate,” is a well-known far-right activist in Florida, posting about local politics on social media and reportedly serving as vice president of the Miami Springs Republican Club. The group didn’t respond to HuffPost’s request for comment.

Monzon has made some attempt to distance himself from the racist right, telling The New York Times earlier this year that he’d been on a “path to de-radicalization.” But he also told the paper that Proud Boys in the Miami-Dade area looked to him for support as they made inroads in the local GOP apparatus.

“I’ve always been known as the radical one, so they were like, ‘Yeah, man, we’re going to get more of our people in here,’” he told the paper.

Some of his social media posts from 2017 show Monzon, who often went by the pseudonym Chris Cedeno, being explicitly racist and antisemitic. According to the Southern Poverty Law Center, Monzon once posted a link to an anti-Black song called “Stay Away From Dixie.”

“Dirty n****rs love abusing power,” read another post by Monzon, according to The Daily Dot. “That’s why in n****r run countries there are always dictators.”

“Too bad Jews decide our foreign policy,” read another.

This article originally appeared on HuffPost and has been updated.