Helen A. Berger is a resident Scholar at Brandeis University's Women's Studies Research Center. This article originally appeared on The Conversation. 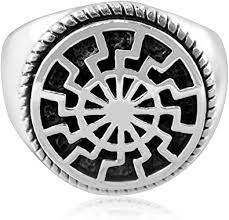 Just before the supermarket shooting that killed 10 people on May 14, 2022 in Buffalo, New York, the suspected terrorist posted a manifesto online. The top is adorned with a “sonnenrad,” or “black sun,” an old Nordic symbol.

The sonnenrad is composed of 12 repeated runes – letters from ancient Germanic languages – arranged in a wheel. Each rune represents a sound, like in the Latin alphabet, but they also have a meaning when they stand alone.

The sonnenrad is a well-known Nazi and neo-Nazi symbol that has been seen in other white supremacist attacks. For the Nazis, the rune in the design stood for “victory.” What is less discussed but nonetheless important is that the symbol has a spiritual component. It is connected to a contemporary religious movement, folkish Heathenry – a form of contemporary Paganism.

Today, “Heathen” is an umbrella term used by people who practice various forms of spirituality inspired by Nordic cultures. Folkish Heathenry, specifically, was resurrected from Nazi spirituality. In the 1960s, a group in Florida began spreading spiritual ideas inspired by Nazi writings, and they gained adherents throughout the United States. In turn, they also influenced some other heathen groups to embrace white identity politics.

Understanding the sonnenrad’s spiritual roots can provide a better grasp of the implications of its use and its importance to members of the far right.

Many kinds of paganism

Heathens are a minority form of contemporary Paganism, which is itself a minority religion. Adherents not only live throughout the United States but are active in Northern Europe, Australia and New Zealand.

All forms of contemporary Paganism are shaped by pre-Christian spiritual practices. Contemporary Pagans rely on archaeological, historical and mythological accounts, mixed with modern occult practices, to create a religion that speaks to their lives in the 21st century but is inspired by past practices.

As a sociologist of religion who has studied contemporary Paganism for over 30 years, I know that all forms of Paganism share a number of similarities. Contemporary Pagans venerate gods and goddesses, view the Earth as sacred, celebrate the changing seasons in a set of yearly holidays and participate in magical practices. Most members of these religions are white. In a survey I conducted with religion scholar James Lewis, which I discuss in my book “Solitary Pagans,” we found that the majority are socially liberal and open to variety in all aspects of life, including ethnic and racial differences.

People who identify as “Heathens” differentiate themselves in several ways from other Pagans. They celebrate the ancient Norse gods once worshiped in Scandinavia, Iceland and Germany. When discussing ethical issues or exploring how best to know and celebrate the gods, they rely on medieval Icelandic texts about them: most importantly, two called the Prose Edda and Poetic Edda. Runes, normally carved or drawn on stones, are used in their rituals and divination – that is, foretelling the future.

Within Heathenism, there is a growing divide between those who are more liberal or middle of the road politically and folkish Heathens who are politically right-wing. Inclusive Heathens believe all who “hear the Norse gods’ call” should be welcomed into the religion, regardless of race or ethnic background.

Folkish Heathens, on the other hand, state that the religion should be restricted to those of “pure” northern European heritage; in other words, a religion for white people only. They view the religion itself as part of their white identity and have incorporated Nazi writings into their spirituality.

Folkish Heathens joined in the Unite the Right rally in Charlottesville, Virginia, in 2017, and since then, more inclusive Heathens have been declaring that folkish Heathens do not represent their religion.

Adolf Hitler was not particularly religious, but some of his lieutenants embraced a form of occult worship that focused on the ancient Norse gods. They viewed it as a religion of the “volk” or folk – the common man and woman who the Nazi Party romanticized as the heart of the nation.

Since extreme antisemitism was at the heart of Nazi ideology, the fact that Jesus was Jewish and Christianity grew out of Judaism troubled some Nazis. Therefore, they viewed Norse traditions as an appealing alternative and imagined it as the “true” faith, the religion of the original occupants of Northern Europe. Their religion emphasized healthy outdoor living and a connection of the folk to “their” land. The people and the nation were tied to the land in a mystical manner.

Propaganda suggested that people considered “outsiders” or “others” were like weeds: They needed to be eliminated both for the health of the nation and for the health of the folk, who were imagined as the “true” people of the land. The runes, the worship of Norse gods – particularly of Odin, who was viewed as a warrior god – and the sonnenrad were all part of this spiritual component that infused elements of the Nazi agenda. The sonnenrad, for example, was embedded on the floor of a palace for SS officers.

The black sun symbol, embraced by some Nazis, now appears in white supremacist propaganda. Gwengoat/iStock via Getty Images Plus

Similarly, folkish Heathens in the U.S. have come to see the land as “belonging” to white people, even though everyone except Indigenous peoples immigrated or were brought here. As with the Nazis, the land is viewed as connected spiritually to a “people.”

In his manifesto, the suspected shooter in Buffalo contends that he is not religious, although he ends with the words “I will see you in Valhalla,” the Norse afterlife for warriors. This was the same ending that the terrorist who had killed 51 people at two mosques in New Zealand in 2019 used in his manifesto. The 2022 manifesto relied on this earlier one as a model, and both illustrate the racist conspiracy theory known as the “great replacement.”

Images like the black sun do not just emerge from the ruins of Nazi Germany, but directly from those who are practicing a contemporary religion. The participation of folkish Heathens is an important piece of the puzzle in understanding the far right.