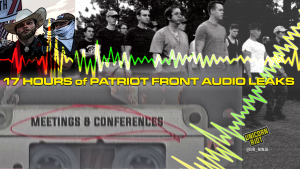 22 audio files obtained by Unicorn Riot reveal the inner workings and deeply bigoted shared mindset of members of Patriot Front, the largest fascist organization currently operating in the United States. Roughly 17 hours of regional network chapter meetings, national meetings, and informal hangouts in late 2021 show how the fascists rally one another and plaster the Pacific Northwest with “promat” or promotional materials. Megalomaniacal leader Thomas Rousseau’s tight fist of control is exemplified by how he micromanages group activities, like the destruction of a large LGBT-themed mural in Olympia, WA.

This release follows more than 400 gigabytes of leaked media from inside Patriot Front and 7 months of RocketChat group chat logs Unicorn Riot obtained and released in January 2022.

Among many themes in these recordings: prominent members share tips on avoiding trouble with authorities and set up interstate trips to recruit, practice field group maneuvers and try to intimidate the public by attacking symbols of tolerance like community murals. Less formal voice chat sessions dwell on racist, antisemitic and homophobic themes. Florida Network Director Stephen Trimboli (‘ND – ‘Lawrence FL‘) encourages members to take their girlfriends along on racist vandalism missions so they can create “blackmail” leverage against them.

What’s in this release? 22 recorded meetings of members’ organizing activity show how the group operates, and illustrate the bigoted preoccupations of its (mostly) young membership. This release has been added to Unicorn Riot’s Vault file stash, alongside the previous 400 gigabytes leak.

Patriot Front’s main project besides self-promotion is a centrally-directed campaign of intimidation through local ‘Network’ chapters as the units. They’re all directed to go to leadership (Rousseau and the Network Directors) for instruction, timing and clearance.

Patriot Front operates more clandestinely than a regular right-wing group, tending towards underground patterns of activity, sporting masks at events and trying to conceal their identities. Trimboli (Florida Network Director ‘Lawrence’) once mused that the group is “a criminal organization in some respects.” Members and leadership know there’s a serious legal vulnerability in how their strictly managed, often interstate “actions” could possibly be considered hate crimes.

Members may put up the groups’ official stickers and flyers on a self-directed basis, but for illegal actions such as “mural cover-ups” Rousseau requires members to consult himself or a Network Director directly for personal permission, the recorded audio shows. Network Directors also keep fastidious spreadsheets logging members’ activities.

17+ hours of discussions show members planning and carrying out actions at the direction of leadership. Members are mainly directed at stickering, banner drops, wheatpasting, stenciling graffiti, and vandalizing pro-diversity murals. All these acts serve to promote Patriot Front’s brand and entice young racists nearby to apply to join online.

When placing “promat” (promotional materials) bearing Patriot Front’s message, members often go on road trips to multiple towns and cities, sometimes to other states where they have no members in order to create the illusion of a local presence.

Patriot Front’s recruitment is often merely a stop-gap measure to replace members who often quit due to frustrations with the group. However, its plan for member intake also seeks to empower and organize young racists who aren’t yet actively implementing neo-nazi agendas offline.

Recordings show how members seek to valorize their brand amidst the domestic ‘nationalist’ movement, which has remolded since the ‘alt-right’ peaked and crashed in Charlottesville in 2017. Splintering from Vanguard America in the deadly rally’s aftermath, Rousseau has sought to build a reputation for Patriot Front as a tightly-organized vanguard, the tip of the spear of the online neo-nazi, white supremacist scene. Internally this is described as turning “nationalists” into “activists,” with the implicit understanding that “nationalism” firmly includes traditional features of fascism like racist and antisemitic beliefs.

Members focus on propagating the organization’s name, website URL, and stentorian slogans with the goal of showing their audience they can generate media coverage and disturb LGBTQ people, Jews, and people of color. Chapters strive to intimidate and trigger controversies in local communities around them and recruit sympathizers.

The group seeks to normalize and encourage acts of hate at a larger scale beyond themselves. Particularly, Patriot Front’s repeated defacing of pro-Black, pro-gay and pro-transgender murals is intended to “show people that you can do something like this, and you can get away with it“, according to one leaked recording.

In these recordings it’s clear a cultivated camaraderie holds members within the organization; they craft a shared identity through frequent group “activism”, camping trips, “hate hikes” and combat drill training. Patriot Front’s camping trips and “hate hikes” aren’t just about encouraging “brotherhood” and physical fitness – they serve as logistical training which can be turned towards more militant purposes in the future.

The audio files also reflect dismissiveness or hostility between members who sometimes see each other as mere instruments to use towards their bigoted political ambitions. Thomas Rousseau often exudes a passive-aggressive and condescending attitude towards Network Directors and rank-and-file members who report in to him over Mumble calls.

Rousseau’s persona alternates between self-abasing and vainglorious, eager to present himself as the first among the ranks, a salt of the earth hard-working leader, not an elitist. He also enjoys rambling through soliloquies, waxing poetic about his personal life and cultivating a cult of personality around himself. 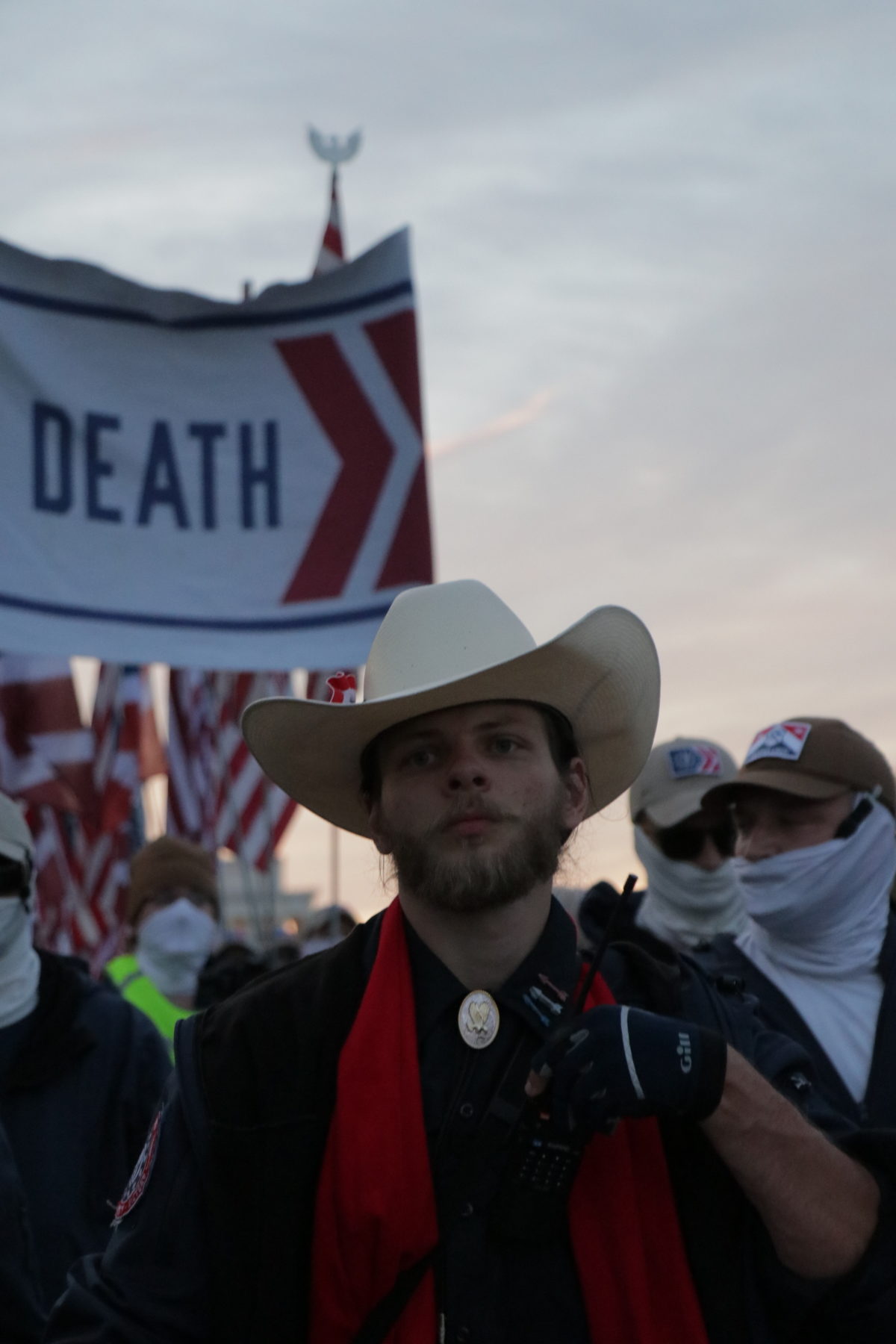 These leaked voice meetings are a helpful case study into the local chapter “Network” model that is the nucleus of Patriot Front. Colton Brown (‘ND – John WA‘), the Pacific Northwest ‘Network 8’ Director who leads most of the leaked meetings, is a prototypical middle manager in Rousseau’s neo-fascist cell organizing system. Brown is eager to please Rousseau, and keen to break records inside the organization for things like the most racist stickers put up in a day. Many members of Brown’s Pacific Northwest fascist cadre have already been thoroughly profiled with deep open-source research by WA Nazi Watch, Rose City Antifa, and other antifascist groups in PNW states.

In the leaked voice meetings Brown repeatedly tries to drag a minor into participating in his chapter’s activities, encouraging him to lie to his teachers and parents in order to do so. He comes off as hard-pressed to recruit to expand Network 8 (mostly via Telegram), and often pushes members to commit what he calls “illegal” acts such as vandalizing murals and stealing pro-tolerance yard signs. He fixates on operational details like planning parking spots and routes for Patriot Front “actions” such as banner drops and spray painting. According to antifascists in Washington state who profiled him, “[Colton] Brown uses the chat to teach members how to commit hate crimes without getting caught.”

Nationally, the group suffers from high turnover and a lot of Patriot Front’s membership is relatively new. Several ‘Networks’ have previously dissolved due to members quitting en masse only to be re-formed later with new recruits. 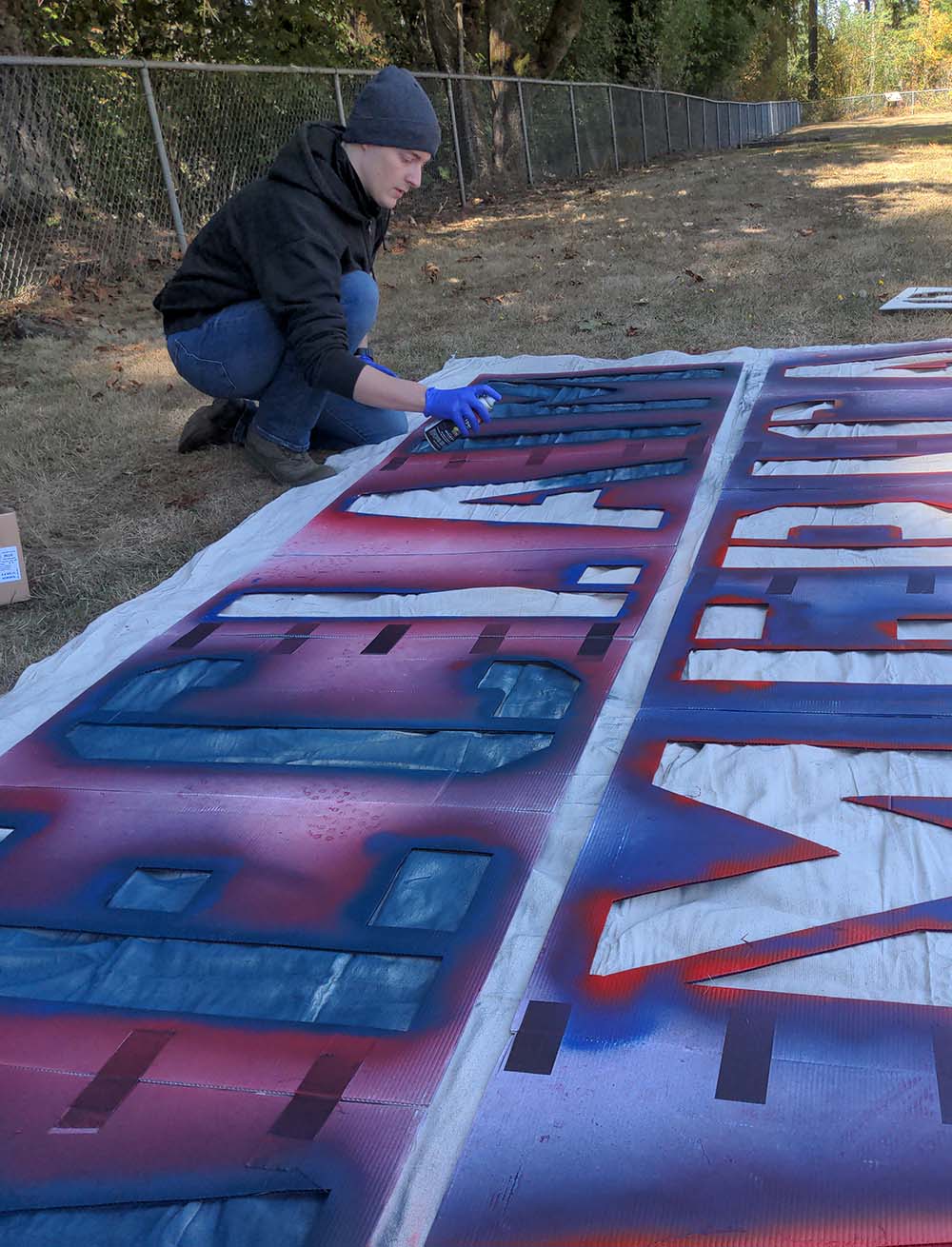 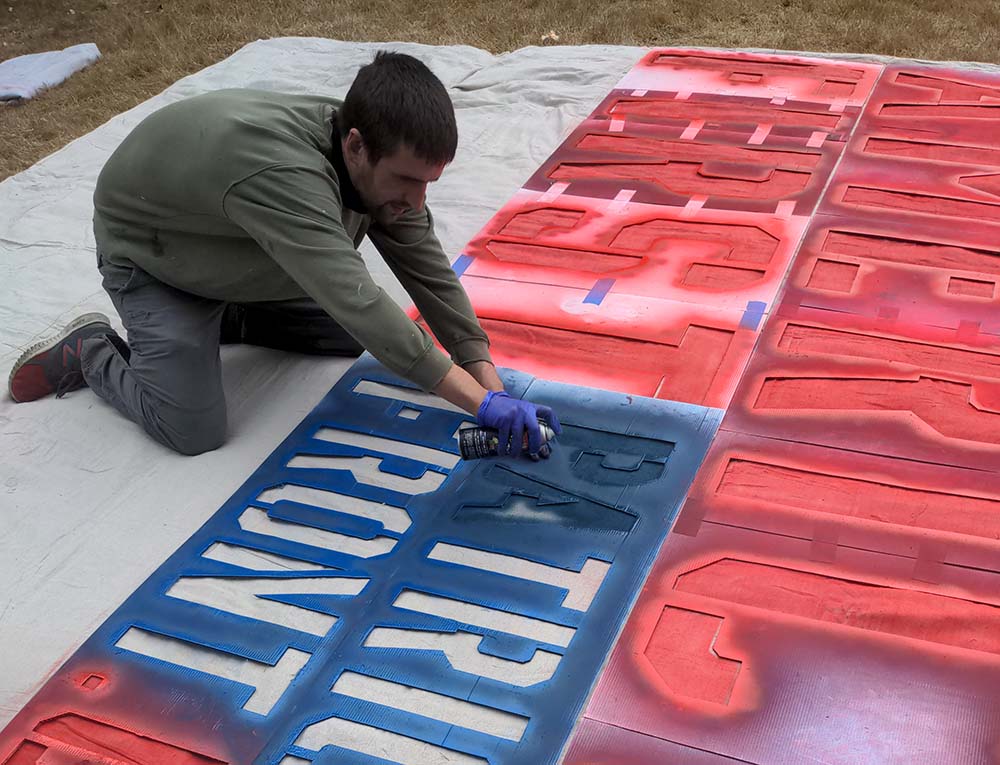 Patriot Front’s members often privately discuss their shared antisemitic and racist views, as well as their admiration for figures like Hitler and Mussolini. Rousseau corrals followers into sticking to his plan for expressing fascist politics within more restrained messaging about “reclaiming America” for “[pure] blooded Americans”.

Some in the racist Internet subcultures close to Patriot Front see the group as cowards for not being publicly racist and antisemitic. Members are encouraged to privately reassure their friends that everyone in Patriot Front embraces “the Jewish Question“ but are committed to what Rousseau believes is a more effective, less counter-productive messaging strategy.