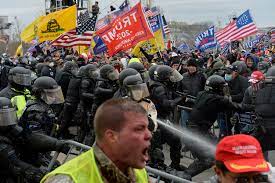 Following the attack on the Capitol in January 2021 and through the November 2022 midterm elections, far-right mobilization has continued to evolve in the United States. Currently, far-right activity in 2022 is on track to exceed the level of activity reported in 2021, driven by a significant uptick in white nationalist, white supremacist, and anti-LGBT+ organizing around the country. This report analyzes shifts in the drivers of far-right mobilization over the course of the year, with a focus on how these drivers shaped the activities of armed militias and violent groups like the Proud Boys in states with contentious elections, as well as a look at trends to watch ahead of the 2024 campaign season.

Far-right militia and militant social movement activity in 2022 is on track to exceed the level of activity reported in 2021.

Overall activity has risen even as the landscape of far-right actors has continued to become more defined, with fewer distinct groups active in 2022 than 2021.

White supremacy/white nationalism is the top driver of far-right protest activity this year.

Anti-LGBT+ mobilization, the second most salient driver, has fueled the largest increase in far-right protest activity this year.

Acts of political violence against the LGBT+ community have contributed to a wider surge in violence targeting civilians, with the number of incidents reported in 2022 already surpassing the total number recorded last year.

These drivers played a prominent role in shaping far-right activity in states with competitive races during the midterm elections, to varying degrees of electoral success. Where far-right candidates were defeated — often corresponding to places where mobilization strategies offered fewer opportunities for the far right to come together, network, and build alliances — drivers are likely to shift in the coming months ahead of the 2024 campaign season.

Following the January 2021 Capitol riot and leading up to the November 2022 midterm elections, far-right mobilization in the United States continued to evolve. The American far right is made up of a variety of actors, including armed militias (e.g. Oath Keepers, Three Percenters), street-fighting organizations and hate groups (e.g. Proud Boys, Patriot Front), and a wide array of more loosely organized movements (e.g. Christian nationalists; QAnon conspiracy theorists; gun rights extremists).1 Far-right politicians, activists, and media figures must rely on a range of different strategies to bring these disparate groups, movements, and populations together, and to mobilize them during important political periods, like elections. Current trends suggest that these efforts — while failing to achieve significant electoral victories for the Republican party during the midterms — have indeed been effective in spurring widespread mobilization: far-right activity2 is on track to be higher again this year than it was last year,3 even as the landscape of far-right actors has continued to become more defined as fewer distinct groups have remained active (see figure below). Though the far right is not a monolith, with many actors remaining highly competitive with one another, this suggests that far-right activity has been coalescing around certain groups and issues.

Strategies that mobilize support — especially those that bring together multiple groups or subsets of the larger base — are successful and will spread among activists, politicians, and the media. Those that are less effective in generating sustained mobilization may be retired as new strategies and drivers of activity emerge in their stead. Which strategy or which driver may be most effective will vary by both time and space, with some drivers proving effective in one state more so than in another, for example — a function of the political environment, and the groups, actors, and populations that are present in that location. Further, as environments change, so too must the strategies used by groups if they are to adapt to the new context.

The strategies and drivers that fuel far-right activity are often inherently exclusionary, oriented around targeting a marginalized ‘other’ — sometimes explicitly for violence. These targets have included political opponents labeled as ‘communists’ and ‘socialists,’ the Black community, the Jewish community, the Muslim community, the LGBT+ community, women, and immigrants, amongst others. Even when such mobilization strategies fail to achieve certain key goals — like election victories — they can still fuel a rise in contentious activity and can increase the risks of political violence faced by these targeted communities.

This year, for example, as a resurgence in anti-LGBT+ rhetoric and organizing (e.g. demonstrations) began to escalate ahead of Pride Month in June — anchored by a renewed focus on the supposed threat to children posed by the LGBT+ community — both far-right and mainstream right-wing candidates integrated the strategy into their campaigns in an attempt to fire up the base and generate enthusiasm ahead of the midterms (PBS, 20 May 2022; 19th News, November 2022; Bloomberg, 10 October 2022). While in many cases this line of attack failed to drive voters to the polls (ABC News, 10 November 2022), it proved effective in fomenting violence against the LGBT+ community. In states that did see high levels of anti-LGBT+ organizing around the midterms, the uptick in activity was correlated with a similar spike in anti-LGBT+ political violence. This suggests that the places that see the highest levels of anti-LGBT+ organizing (i.e. where people protest against LGBT+ rights, or show up to disrupt LGBT+ events, or engage in propaganda distribution), are also the places where the LGBT+ community is at heightened risk of targeted political violence, underlining the relationship between mobilization drivers and violent outcomes.

In short, in contexts where certain mobilization strategies have been effective, those strategies will likely continue to be used — with those same targeted populations remaining at high risk for associated violence. In other contexts, where the political environment has changed or prior drivers are not (or are no longer) effective, additional strategies and drivers are likely to (re)emerge — potentially ratcheting up the risk for other marginalized and targeted communities. Understanding these dynamics can help stakeholders identify and monitor evolving risks to their communities and allow them to develop effective means of mitigating these risks.