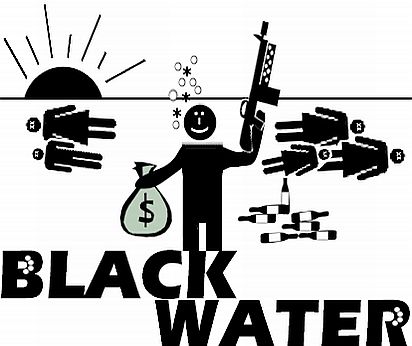 THE Blackwater issue is fast descending into a shameful farce at the level of the government. Despite all evidence to the contrary, the Interior Minister and his Secretary continue to push the lie forward that there is no Blackwater in Pakistan. But on Tuesday the Interior Secretary really topped the lying by declaring, before the National Assembly’s Standing Committee on Interior, that “neither Blackwater and DynCorp nor any other such security agency is operating in the country.”

Yet the record of the Interior Ministry will show licenses of prohibited bores being requested for DynCorp by the US embassy and the company representative in Pakistan (copies of which were published in The Nation), and the US embassy accepting that DynCorp was working for them. The whole Inter Risk case was linked to DynCorp also.

Interior also knows of other such US security companies’ affiliates working in Pakistan, often with Pakistani partners. So why all the lying, even to Parliament? Even when ex-CIA operatives and the Blackwater issue’s investigative journalist Scahill has provided extensive evidence of these companies operating in Pakistan and Afghanistan, and NWFP officials as well as Pakistani investigative journalists have done their own bit of fact collection and exposes, Rehman Malik and his Secretary refuse to budge from their increasingly overt falsehoods. And this is despite the arrest of Interior Minister of State’s private secretary by the FIA in the Inter Risk case and issuance of prohibited bore licenses. What is so harmful regarding these companies’ agendas that the Interior Ministry is prepared to lie to all concerned? Or is it all because of the scandals and US pressure?

Previous Article
The Truth About Iraq: The Country is Out of Control
Next Article
MK-ULTRA Victim Maryam Ruhullah