" ... [Capt.] Kruger had taken the plastic plaques which were affixed to a wooden board down from Rocky Butte while he was facing federal lawsuits between 2002 and 2005 alleging excessive force during downtown anti-war protests. ... " 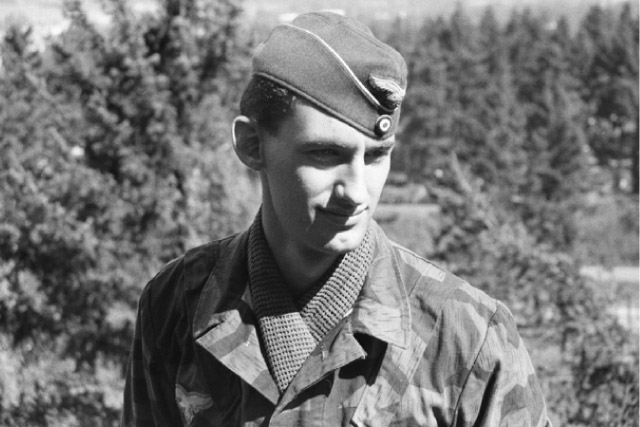 For years, past police chiefs and city attorneys have vigorously fended off critics who called Portland police Capt. Mark Kruger a "Nazi sympathizer." They said he was simply a history buff who collected military memorabilia and had belonged to a World War II reenactment club.

But now, a Portland commander and a Portland Police Performance Review Board have found Kruger brought "discredit and disgrace upon the Bureau and the City," by building a public tribute to five Nazi-era German soldiers at a city park while employed by the police bureau.

During the course of the police investigation, Internal Affairs investigator Mike Barkley learned the city attorney's office had stashed away the plaques in a litigation file for at least six years.

But the city had never initiated an investigation into what they were for or why Kruger put them up until the city got pressure from Robert Seaver, a former friend of Kruger's who dogged city officials with explosive e-mails, interviews with the media and an embarrassing YouTube video featuring Kruger posing in German uniforms.

Former police Commissioner Dan Saltzman, who said he was alarmed there hadn't been a prior in-depth inquiry, last October called for an internal investigation of Kruger. Seaver filed a formal complaint with the Independent Police Review Division the next month. Both prompted the Police Bureau's first, wide-ranging internal investigation of Kruger and a sustained violation.

Now, a former Portland attorney who had sued the city and Kruger in federal court, and Seaver, accuse the city attorney's office of a "cover up."

The police Performance Review Board found Kruger nailed "memorial plaques" of five Nazi soldiers as a shrine to a tree on the east side of Rocky Butte Park sometime between 1999 and 2001, according to a letter Internal Affairs Capt. Ed Brumfield sent to Seaver. The letter is dated Sept. 7, 2010.

Kruger was a Portland officer at the time, but was not on duty when he erected the plaques. Kruger called the memorial "Ehrenbaum" or "Honor Tree."

Kruger had taken the plastic plaques which were affixed to a wooden board down from Rocky Butte while he was facing federal lawsuits between 2002 and 2005 alleging excessive force during downtown anti-war protests. He gave them to the city attorney's office.

"We were defending him in the litigation. The bureau was aware of it. I know the whole questions of the plaques was out there," City Attorney Linda Meng said Friday. " I know we dealt with it as part of the litigation."

Yet Alan Graf, one of the plaintiff's lawyers who accused Kruger at the time of being a Nazi sympathizer who had no tolerance for any "political dissent from the left," said when he learned about the plaques while deposing Seaver, he issued a wide-ranging request for discovery, and a second chance to depose Kruger.

"While being deposed, I described a memorial that I had helped Kruger to construct and place," Seaver said. "He wanted to put it where people couldn't bother it, but somewhere he could see every day."

Graf sent an investigator to Rocky Butte to locate them, but he only found a bunch of screws lying in the dirt.

According to federal court records and Graf, the city vigorously fought any further discovery or depositions.

"Sergeant Kruger's interest in German military history and related hobbies (military reenacting and collecting military memorabilia and books on military history) are not relevant to the claim or defense of any party and no further discovery should be allowed as to these matters," deputy city attorneys William Manlove and Tracy Pool Reeve wrote in a legal memo opposing further discovery and depositions of Kruger.

"They covered up that evidence," Graf said. "Now that I know the city attorney's office knew about these plaques, I question their ethics."

Seaver, in an explosive e-mail to the mayor recently, argued that Kruger tampered with evidence during the pending civil lawsuits by taking the plaques down, and the city attorney's office "hid them and covered it all up." He urged the mayor to read Barkley's report.

"This system is ripe with abuse," Seaver said. "This is very troubling and a level of corruption I did not know existed in Portland city government."

Meng said she didn't know the exact date that Kruger brought the plaques into the city attorney's office, but said it was during the litigation. She declined to comment about suggestions of a cover-up.

Kruger, in court records during that litigation, acknowledged he owns Nazi memorabilia and has worn German uniforms to World War II re-enactments sponsored by the Northwest Historical Association. But Kruger denied he espouses any views of the Nazi party. Now an East Precinct captain, Kruger did not return calls on Friday.

Kruger's commander at the time, Dave Famous, wrote that he was "deeply concerned" that the plaques purported to honor SS-Obersturmfuhrer Michael Wittman, a member of the Waffen SS, and Kdr. Harald von Hirschfeld who commanded a regiment that participated in the execution of thousands of prisoners of war on the Greek island of Cephalonia in 1943.

According to Internal Affairs Capt. Brumfield's September letter, Kruger confirmed Seaver's account of the plaques, but Kruger said he was "honoring the men because of their military exploits rather than their political affiliations."

Yet Cmdr. Famous, noting Kruger's degree in history and extensive study of German history, found Kruger should have known that memorializing "a Waffen SS member and the commander of a battalion responsible for a large-scale massacre of prisoners of war could alarm a member of the public familiar with these historical events."

The review board agreed, finding Kruger violated the bureau's directive on professional conduct. Their finding now goes to the chief for potential discipline.