” … While the Southern Poverty Law Center describes the organization as past its zenith and McManus as one of the most dangerous people in America, he wore the designation as a badge of honor. … “ 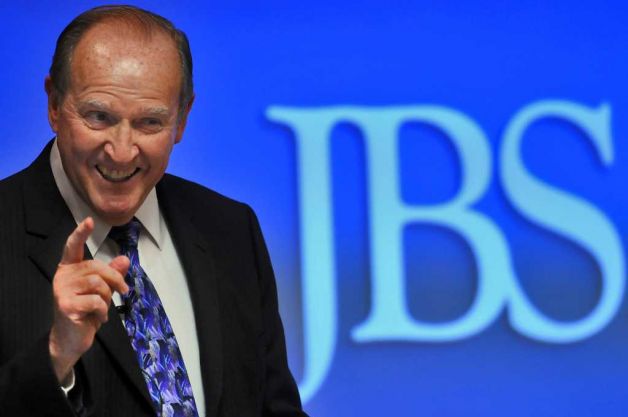 John McManus delivering one of his coded “Constitutionalist”  Bircher diatribes

COLONIE — For many years, the John Birch Society existed on the fringes of the Republican Party, deeply suspicious of its establishment and questioning even its most revered figures, like former President Dwight D. Eisenhower.

With the advent of the tea party movement, the group is finding kindred spirits for its fears of impending one-world government.

At the Marriott Hotel in Colonie on Monday, some 400 people came to hear the society’s 20-year president, John F. McManus. President Barack Obama got only passing mentions; the talk’s focus was on the “Betrayal of the Constitution: an expose of the Neo-Conservative Agenda.”

While the Southern Poverty Law Center describes the organization as past its zenith and McManus as one of the most dangerous people in America, he wore the designation as a badge of honor. He sees the tea party movement as a sign of growing support.

“The influence is soaring,” he said prior to his talk. “All the new groups starting have gotten people off the couch. You’d have to be a little bit brain-dead not to know the country is in trouble.”

The society opposes the wars in Iraq and Afghanistan, described as unacceptable intrusions into the affairs of other nations. In his talk, McManus denounced President George W. Bush and his father, calling the elder Bush a socialist. The society, he said, led the fight to prevent the United States, Canada and Mexico from becoming one North American Union.

He made a series of comments about neoconservative leaders. starting with Irving Kristol, considered the father of the movement.

“He accepted the New Deal of Franklin Roosevelt, and that’s socialism,” McManus said as the audience called out “That’s right!”

He described the society’s view as “noninterventionist.”

At times, the event took on the tenor of a revival meeting, with audience members shouting encouragement. At the back of the room, books, DVDs, magazines and booklets condemned the United Nations, Newt Gingrich and even Abraham Lincoln’s “real agenda and unnecessary war.”

McManus urged his audience to get Congress to cut spending.

Mitch Goldstein of Glenmont was happy to hear the message.

“I am an enthusiastic supporter of the Constitution,” he said. “I’d like to see the country follow the ideas of the founders. Our federal government was created to defend a citizen’s life, liberty and property from outside incursion, including being set upon by the government.”

Carol Morris of Rotterdam Junction said she wants the nation to avoid wars, like McManus said.

“It would be nice if there were a lot of people elected in favor of less government, a much smaller government,” she said. “These people go to war and put it on our tab.”