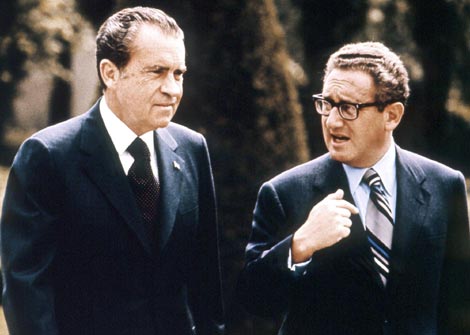 NEW YORK, Dec. 11, 2010 /PRNewswire-USNewswire/ -- Conversations between former President Richard Nixon and key aides displayed a shocking level of bigotry in the Nixon White House from the President downwards, AJC said. This followed the release of new tapes which recorded the President speaking in derogatory language about Americans of Jewish, black, Irish and Italian descent.

AJC was also dismayed by a remark made to the President by his Secretary of State, Henry Kissinger, in which the latter stated, "[I]f they put Jews into gas chambers in the Soviet Union, it is not an American concern."

"The Nixon Oval Office was clearly a place where bigotry and prejudice were normalized," said AJC Executive Director David Harris. "It is deeply saddening to observe that the person elected to our nation's highest office employed such crude, vicious stereotypes in referring to a range of groups. Given earlier revelations about the Nixon White House, it's true that this does not come as a total surprise, yet the shock value of the new information is still undiminished. President Nixon, the leader of a proudly pluralistic country, believed Italians 'don't have their heads screwed on tight,' the Irish 'get mean' when they drink, Jews were 'abrasive,' and blacks needed to be what he termed 'inbred' in order for them to make progress."

On Kissinger's remark about Soviet Jews, Harris, who was an activist in the Soviet Jewry movement twice detained by Soviet authorities, stated:

"That a German Jew who fled the Nazis could speak of a genocidal outcome in such callous tones is truly chilling. Perhaps Kissinger felt that, as a Jew, he had to go the extra mile to prove to the President that there was no question as to where his loyalties lay. That he used such graphic language in doing so speaks volumes about the degree of prejudice inside Nixon's Administration. It's hard to find the right words to express the degree of our shock and revulsion at Kissinger's remarks."

The tapes, released by the Nixon Library, were recorded in February and March 1973, shortly before the Watergate scandal which resulted in President Nixon's resignation. Nixon, who was pardoned by his successor, Gerald Ford, passed away in 1994.