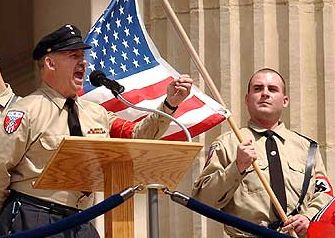 Other issues the April 16 rally will address are high state property taxes, child molesters and an alleged “double standard” in which only crimes by whites against minorities are described as “hate crimes,” he said.

“We’re all considered racists or white supremacists, but that’s not what most of our members are about,” the newspaper quoted him as saying.

He acknowledged the organization’s symbol is a swastika, used by Nazi Germany during World War II.

“The National Socialist Movement is distinctive in that they will wear Nazi-style uniforms,” state Anti-Defamation League regional Director Etzion Neuer told the newspaper.

“One will typically see them dressed in swastikas, even more than most white supremacists,” he said. “The visual that we might see of neo-Nazis clad in uniforms on the steps of the Capitol will revolt most New Jerseyans.”

He called the gathering “disturbing” and advised people to stay away from the rally.

NSM rallies often attract counter-protests that sometimes turn violent. A Nov. 13 rally and march in Phoenix turned into a rock-throwing melee in which two young men were arrested.

Will Mubarak be Replaced by Egypt’s “Mr. Torture?”
Feb 06