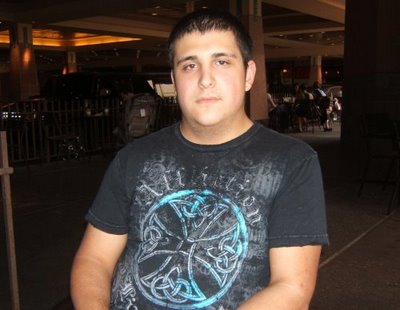 Coletto: "I was in bed with the devil, satanism is real, satanism has a large following in the National Socialist Movement. ... "

In the parlance of neo-Nazi-sim, former sieg heil-er and Joe Arpaio-admirer Thomas Coletto has "flipped," turning away from the National Socialist Movement he once embraced, and which had embraced him in return. Coletto was NSM's go-to guy in Phoenix for a short span. He distributed anti-Mexican fliers in Valley neighborhoods. He organized an NSM march to the Arizona State Capitol planned for November 7, which is still on and could draw marchers from California and other states. And most notably, Coletto cozied up to Sheriff Joe Arpaio in a now infamous photo-op, which Coletto quickly posted to the white-supremacist Web site Stormfront.org.

Regular readers of this blog know that I've been observing Coletto's activities ever since he began distributing NSM literature under the pseudonym "Vito Lombardi." And it was I who revealed Coletto's real name and criminal history. Last year Coletto pleaded guilty to criminal damage in a 2007 incident that involved swiping chemicals from his high school, such as ammonium nitrate, the same compound used by Timothy McVeigh in the 1995 Oklahoma City bombing. Cops and journos said Coletto and his pals were plotting a Columbine-type attack on Desert Mountain High School. Coletto contends it was all juvenile high jinks misinterpreted by authorities. ...

In the letter, Coletto alleges that his former superior, NSM-PHX/AZ unit leader Scott Hume (alias, "Shawn Hughes," alias "Kevin James") attempted to "push Satanism" on him, and asked Coletto to "accept a Nazi demon" during some late-night chat sessions. Coletto also states in the letter that Hume has "a satanic symbol tattooed on his upper back." I called Hume and sent him e-mails, to which he didn't reply. However, the next day, national NSM "Commander" Jeff Schoep e-mailed me, informing me, "NSM members have been advised not to answer your questions," and that Coletto had signed some sort of non-disclosure agreement with NSM.

Of course, Schoep didn't mention that allegations of Satanism have dogged NSM for years. The Southern Poverty Law Center's Intelligence Report magazine wrote up these connections in 2006. There are also Satanist Web sites out there where Satanists discuss how to weed neo-Nazis out of their ranks, which begs the question: Which is worse, genuflecting to Beelzebub, or slapping a swastika on your arm?

(Interestingly, Coletto informed me that a local neo-Nazi he had met once at a white-power BBQ claimed to work in the Maricopa County Attorney's Office as a clerk or secretary. ...

Thank you very much for meeting with me and giving me a chance to change my ways and separate myself from hate groups, and racist groups forever. I hope people can realize or understand, I never hated anyone, or wish harm on anyone. I want to move on with my life now.

I appologize to anyone who I have offended or hurt with my small appearance with the National Socialist Movement.

I was in bed with the devil, satanism is real, satanism has a large following in the National Socialist Movement.

If you are young like me reading this, please learn from my many mistakes.

Didn’t Michele BAchmann say she was a satanist? Yeah probably is a nazi too since she is a budget cutter from hell too. Gotta love the new nazism; kill off the defenseless, the voiceless, and those forgotten by the selfish among us. Gotta balance the budget for the antichrist by killing off the elderly and disabled with the budget cuts. Al those liberals talking about population control didn’t think it would entail killing off their grandparents slow after the nazis stole their pensions, did they? Lyle Courtsal

10 Points of Fascist Policy: Manifesto of the British Union of Fascists, by Oswald Mosley