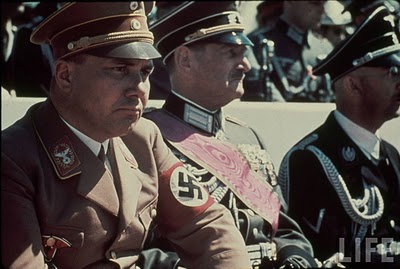 BRUSSELS — Top Nazi Martin Bormann, who German authorities say died in 1945, escaped Berlin and lived in Latin America disguised as a priest, a former Belgian collaborator said in an interview published Saturday. Paul van Aerschodt, 88, who was sentenced to death in Belgium in 1946 but broke out of prison before his execution and now lives in Spain, told the Derniere Heure newspaper he had met Bormann four times in La Paz, Bolivia, around 1960. "Bormann had come from Paraguay and was plotting with some 20 officers a coup to overthrow (dictator Juan) Peron in Argentina," van Aerschodt said. ... He said Bormann had found refuge in Bolivia in 1947 after another priest helped him to obtain a visa.  Remains found in Berlin in 1972 were identified as Bormann's and he was officially declared dead by German authorities. The identification was confirmed by DNA in 1998 but some sceptics believe the remains had been brought from elsewhere to be reburied in Berlin. ... Van Aerschodt escaped from a Belgian prison in 1945 and fled to Spain where he was detained for a while but was helped by a priest to reach Bolivia and lived there till 1964. ... FULL STORY