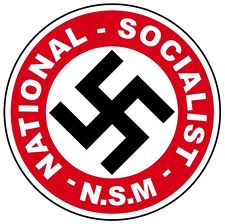 While some have taking this opportunity to blame the Giffords tragedy on politics, I have been trying to say it doesn’t really matter as there are other very real threats related to right-wing extremism.

Brisenia Flores and her father were killed by Minutemen, a known hate group.

The Minutemen used to have among their members JT Ready and Sean Pearce, Russell Pearce’s son who now works with Sheriff Arpaio. The links are all there.  The right-wing extremists are armed and dangerous, and they continue to get more armed and more dangerous with new legislation, including bills to allow guns on campus.

How about we worry about getting more Arizonans and cheaper books and tuition on campuses, rather than more guns?

Janet Napolitano has already issued warnings about Christian militias, and that is one thing all these groups have in common, from the TEA Party to neo-Nazis. They love their flags and their crosses, and they love guns.  Why wait for the Apocalypse when you can start blowing stuff up now?

To this day the FBI has not responded to death threats that groups such as Derechos Humanos has received, and I have seen the letters myself. Does it matter that Isabel Garcia is a popular target of hate-talk radio Jon Justice and the Minutemen?  The FBI will probably wait until it is too late, and then wonder what they could have done to prevent it, but all the warning signs are there.

This is a serious problem that Arizona will have to address ASAP. How do you balance the First and Second Amendments in the hands of hateful and violent people? Is prevention possible or can law enforcement only react to the past?

Hint hint… is anyone listening?

PHOENIX – A federal grand jury in Phoenix has returned a three-count indictment against a Valley man for possessing explosive devices.

In a story ABC15′s Christopher Sign has been following since Monday, we have learned Jeffrey Harbin of Apache Junction had 12 grenade-like improvised explosive devices built with PVC pipe filled with black powder, ball bearings and an improvised fusing system.

Harbin has ties to the National Socialist Movement according to a former member.

Does it even bother anyone that we are talking about real-life neo-Nazis in Arizona today, including connections to the office of Senate President?