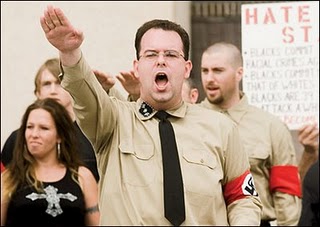 Neo-Nazi leader William A. White, serving prison time for racially motivated threats, lost a civil lawsuit brought by five women victimized by his diatribes and, along with the American Nazi Party, must pay them $545,000, a federal jury decided Friday.

The jury of seven white men held White liable for compensatory damages of $265,000 and the American National Socialist Workers' Party for $280,000.

In a trial that began Wednesday in U.S. District Court in Roanoke, five black tenants from a Virginia Beach apartment complex claimed White harassed them in May 2007 after learning of a discrimination lawsuit they had filed against their white landlord.

As the commander of a now-defunct neo-Nazi organization in Roanoke, White became so angry when he learned of the lawsuit that he fired off letters to the women with racial epithets.

It was a tactic White - described by one hate watch group as perhaps America's loudest and most obnoxious neo-Nazi - employed for years before he was jailed in 2008 on charges of making racially motivated threats.

During the trial, the women described their reactions to the letters.

One said she began to suffer seizures. Another developed an ulcer. All said they live in fear of White and his followers.

Annette Reddick testified that she no longer lets her 10-year-old grandson outside to play or ride his bike alone.

"I didn't know what was around the corner waiting for us," she said.

White, 33, did not testify or present any evidence.

White, who moved to Roanoke in 2004, once owned about 20 houses in the West End neighborhood. He claimed nearly $2 million in assets at one point but ended up filing for bankruptcy protection in 2008.

Because the jury found White's actions to be willful and malicious, the $545,000 judgment against him will stand regardless of the bankruptcy proceedings.

After deliberating about three hours Friday, the jury awarded damages to Reddick, her daughter Tasha Reddick, Arlene Carter, Tiese Mitchell and Crystal Lewis. White was ordered to pay the women amounts from $45,000 to $65,000. His now-defunct organization, the American National Socialist Workers' Party, was found liable for another $280,000.

The jury chose not to impose punitive damages.

After hearing from the women, the jury watched a videotaped deposition of White taken two years ago.

He yawned often and spoke in a flat tone when questioned by lawyers for the plaintiffs and the U.S. Justice Department.

"I don't like people who lie," he said when asked why he wrote the letters.

"The complaint is so obviously false; it's clearly make-believe. If you read it, it looks like the kind of thing blacks make up. Blacks like to make up crazy stories that make them look like victims when they are wrong."

He described blacks as animals and Jews as demons.

"You may find Mr. White reprehensible," his attorney, John Weber, told the jury. "But you still have to decide this case under the rules of the law."

Weber had argued that the women had not proved their case, in part because they chose to stay in the apartment complex after receiving White's letters.