" ... This controversial MGM film emerged, after many revisions -- some demanded by the White House -- as a Hollywood version of the official Hiroshima narrative: the bomb was absolutely necessary to end the war and save American lives. ... " 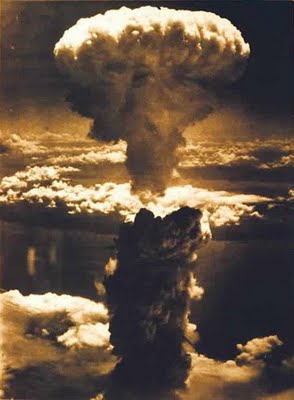 Creative artists of every variety have made incisive, satiric or powerful statements about nuclear threat. They have offered cautionary works that depict the horror of the bomb or its meaning in our society. What these artistic statements share, however, with rare exceptions, is an avoidance of the specific subject of Hiroshima.

Since August 1945, hundreds of "nuclear" movies have appeared.  At least one American "nuclear" film was a work of genius (Dr. Strangelove), and several others explored the issue thoughtfully (Fail-Safe, The War Game, Testament and Desert Bloom come to mind).   But more often the fear of nuclear war in Hollywood spawned survivalist fantasies, irradiated-monster films and post-apocalypse thrillers.

What is striking is that few of these films say anything directly about Hiroshima. Almost all of them are works of pure fiction, imagining nuclear attacks in the near or distant future while ignoring the two instances when atomic weapons have already been used: Nagasaki and Hiroshima.

Only three Hollywood movies have emerged about the making or use of the first atomic bombs: The Beginning or the End, Above and Beyond,  and Fat Man and Little Boy (the only such film since the 1950s).

Ambivalence or guilt is certain to be evoked by any cinematic treatment of Hiroshima. Perhaps that is why the films all grapple with the notion of American decency. The three Hollywood films have much in common: Each was highly touted and directed by a talented film maker but was an artistic failure. Each was subject to political pressure or scrutiny.  Here's a close-up look at the "coverup"--led by the Truman White House--of the first "Hiroshima movie,"  some of it based on material we were first to discover at the Truman Library in Missouri.

The Beginning or the End

This controversial MGM film emerged, after many revisions -- some demanded by the White House -- as a Hollywood version of the official Hiroshima narrative: the bomb was absolutely necessary to end the war and save American lives.

About a month after the Hiroshima attack, Sam Marx, a producer at MGM, received a call from agent Tony Owen, who said his wife, actress Donna Reed, had received some fascinating letters from her high school chemistry teacher, Dr. Edward Tomkins--who was not at Oak Ridge.  Tomkins expressed surpise that Hollywood did not already have an atomic bomb feature in the works, and wondered if the film industry wanted to warn the people of the world about the coming dangers of a nuclear arms race.

Soon, MGM boss Louis B. Mayer gave the film a go, calling it "the most important story" he would ever film.  Marx and others from MGM met with the atomic scientists at Oak Ridge and elsewhere.

Early scripts raised doubts about the Hiroshima decision and portrayed the effects of the atomic bombing in a way that would have shocked many viewers, with Hiroshima pictured as ghostlike ruins and a baby with a burned face. The overall political message was alarmist and aligned with pro-disarmament scientists: It would have been better to lose half a million American lives "than release atomic energy in the world."

Then something happened, and the sensibility of The Beginning or the End shifted radically. The decision to use the bomb, in revised scripts, was viewed as justifiable, even admirable. Now, after the bombings, no victims appeared -- just a burning landscape observed from the air. Amazingly, Gen. Leslie Groves, the director of the Manhattan Project, had secured the right of script approval -- along with a hefty $10,000 fee -- and played a vital part in reshaping the film.

MGM hired Norman Taurog to direct the film and Hume Cronyn to star as Robert Oppenheimer.  Everyone from famed columnist Bob Considine to author Ayn Rand were involved with early scripts.  Nearly all of the scientists impersonated in the film signed releases, even Albert Einstein, but unlike Groves and President Truman, were not given script approval. Oppenheimer visited the set after being assured that his character, the film's narrator, would display "humility" and "a love of mankind." The Hollywoodization of the bomb had begun.

Even in minor details, the revised script now justified the bombing. General Groves made light of nuclear fallout. The B-29's flying over Hiroshima were pelted with heavy flak, a fabrication that makes the attack more courageous.   The name of one of those planes was changed from Bock's Car to Necessary Evil.   Nagasaki was not mentioned at all.  One scene depicting a fictional German scientists visiting a (fabricated) Japanese nuclear facility in--Hiroshima.

Yet it was in the script's central melodrama that the true message of the film was conveyed. Matt Cochran, a young scientist arming the bomb, prevents a chain reaction from blowing up 40,000 people on a Pacific island -- and thereby exposes himself to a fatal dose of radiation. But just before he dies, Matt concludes that "God has not shown us a new way to destroy ourselves. Atomic energy is the hand he has extended to lift us from the ruins of war and lighten the burdens of peace."

After screening the finished, watered-down, film, famed columnist Walter Lippmann said he still found one scene "shocking." President Truman felt uncomfortable with it as well. It pictured Truman making the decision to use the bomb, and the president and his aides objected to his deciding, after only a brief reflection, that the United States would use the weapon against Japan because "I think more of our American boys than I do of all our enemies." This was actually true, of course.

After protests from the White House, the MGM screenwriter James K. McGuinness deleted the offending scene and wrote a new one in which Truman explained that in his many discussions on the matter the "consensus of opinion is that the bomb will shorten the war by approximately a year." In the revised scene, Truman revealed that the United States would drop leaflets warning the populace of "what is coming" as a means to "save lives." He said there was a "consensus" that dropping the bomb by a year (there was no such thing) and he predicted that a "year less of war will mean life for . . . from 300,000 to half a million of America's finest youth" (a highly inflated figure).

And he advised that the targets had been picked for their prime military value, rather than the truth: They were picked because they had not been bombed previously and so would demonstrate the pure power of this new weapon. In any case, the aiming points for release of the bombs would be the center of the cities, not over any military bases.  The new scene had Truman claiming he had spent "sleepless nights" making the decision.  But in real life he proudly insisted he had never lost any sleep over it.

Still, the White House demanded further changes; among them, deleting a reference to morally concerned scientists who favored demonstrating the bomb for Japanese leaders in a remote area before dropping it on a city.

Truman even wrote a letter objecting to the actor who had portrayed him in the original scene, and the actor, Roman Bohnen was replaced.  Bohnen would write a sarcastic letter to Truman, informing him that people would be debating the decision to drop the bomb for 100 years "and posterity is quite apt to be a little rough." Truman, who normally ignored critical letters, took the trouble to reply and defend the decision, revealing, "I have no qualms about it whatever."

The Beginning or the End, which billed itself as "basically a true story," opened across the country in March 1947 to mixed reviews (see video below). Time laughed at the film's "cheery imbecility," but Variety praised its "aura of authenticity and special historical significance."

Harrison Brown, who had worked on the bomb, exposed some of the film's factual errors in The Bulletin of Atomic Scientists: he called the showering of warning leaflets over Hiroshima the "most horrible falsification of history." But in the far more influential New York Times, Bosley Crowther called the picture a fair and "creditable" reenactment and observed that MGM had "taken no obvious sides in the current atomic contentions."

The MGM movie was seen by hundreds of thousands of Americans. Because of its quasi-documentary form, its depiction of history was probably accepted by most viewers.  (See MGM preview below.)  But famed physicist Leo Szilard, after attending a screening, summed it up this way:  "If our sin as scientists was to make and use the bomb, then our punishment was to watch The Beginning or the End."