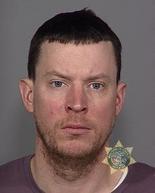 A federal judge in Ohio sentenced a Portland neo-Nazi today to 18 months in prison for mailing a hangman's noose to the president of an NAACP chapter.

U.S. District Judge David A. Katz, in Toledo, ordered that Daniel Lee Jones, a onetime regional director of the American National Socialist Workers Party, be remanded into the custody of U.S. marshals and sent to prison.

Jones pleaded guilty last May to communicating a threat to F.M. Jason Upthegrove by sending him a noose at his home. Upthegrove, who is African-American, was president of the Lima, Ohio, chapter of the National Association for the Advancement of Colored People.

Authorities said Upthegrove was targeted for the racist mailer after he spoke out against police for a drug raid in Lima that left 26-year-old Tarika Wilson dead and her 14-month-old son, Sincere, wounded.

The government accused Jones of mailing hate fliers about the shooting to residents of Lima, which Upthegrove publicly condemned.

On Valentine's Day 2008, Upthegrove received a package containing the noose.

Judge Katz ordered Jones to be supervised by the court for three years after his release from prison.

No one answered Jones' cell phone before or after his sentencing today. His court-appointed defense lawyer, Andy P. Hart, did not return a voice mail or email seeking comment.