Sharon Mondé recalls her days as an Arlington youngster in the 1960s, when the county served as headquarters of the American Nazi Party and its leader, George Lincoln Rockwell.

“We stayed off of Wilson Boulevard, because we weren’t sure which homes they were in and we really weren’t sure who was part of the movement,” said Mondé, who went on to a long career as an educator in Arlington’s public schools. “Any time a group of us blacks gathered in a public place to have fun like teenagers do, they were there.”

Mondé was one of about 100 local residents who gathered at Central Library Dec. 16 to learn about, and share memories of, one of the stranger chapters in the county’s history.

In a discourse titled “Swastikas on Wilson,” local historian and journalist Charlie Clark detailed the history of the American Nazi Party’s presence in Arlington, which dissipated after Rockwell’s murder in the late 1960s, but didn’t completely disappear until several decades later.

Sponsored by Encore Learning, Clark detailed the actions of Rockwell, a U.S. Navy veteran and founder of the American Nazis, who set up base in five different houses in Arlington over the nine-year period from 1958 until his shooting by a disgruntled underling in 1967.

Karin Price, who serves on the special-events committee of Encore Learning (previously the Arlington Learning in Retirement Institute), said the group was eager to hear from Clark, who had penned an article on the subject for Arlington magazine.

Like Mondé, Clark grew up in Arlington, and he recalled passing by an American Nazi Party house at 928 North Randolph St. on his way to Little League games.

“There was a big wooden sign on the roof that said ‘White Man Fight, Help Smash the Black American Revolution,’ and I can’t remember how my parents explained that when the subject came up,” said Clark.

According to Clark, Rockwell had a relatively normal ideological upbringing until he was stationed in Iceland during the Korean War, and became obsessed with Aryanism after reading “Mein Kampf.”

Upon returning to the U.S., Rockwell landed in Arlington through the funding of a white supremacist, Harold Arrowsmith Jr. Arrowsmith bought Rockwell a house at 6512 Williamsburg Blvd. for his operation which Rockwell and his lieutenants occupied until 1961, where they printed fliers with hate speech and attempted to mobilize national support. 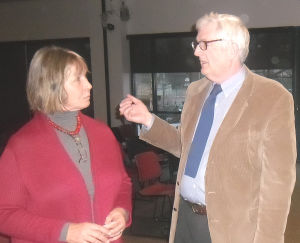 Charlie Clark, right, chats with Karin Price at the Encore Learning forum on the American Nazi Party and its history in Arlington. (Photo by Orrin Konheim)

“No matter what, we wouldn’t walk directly in front of the house for fear the German shepherds would attack you,”  said Joan Mulholland, an Arlington native who in the 1960s would find herself in the thick of the civil-rights movement.

“There was a lit-up swastika flag in the bay window,” Clark said. “I have friends, a little older, maybe, who can recall the bus drivers during school days pointing  this out to kids as they stopped by.”

While Rockwell made national headlines and became a minor political presence as a gubernatorial candidate in the 1965 race (he garnered a little over 1 percent of the vote), his time in Arlington was marked largely by quiet tension.

Allison McTavish recalled the appearance of party members at a local Independence Day parade. “A contingent of young Nazi members was goose-stepping, and no one said a thing,” she said.

Rockwell and his band of followers (estimated by Clark to be between 20 and 30 in Arlington) were most visible locally through appearances at School Board meetings and the protests they launched. Among their targets were Mario’s Pizza, the release of the 1960 film “Exodus” and a Jewish congregation that met at the Unitarian Church.

With the exception of a 1961 assault incident against a Washington-Lee High School student that resulted in the arrest of two American Nazi Party members, there were no reported incidents of overt criminal activity. As it became clear that Rockwell was seeking publicity for publicity’s sake, the D.C. area’s major newspapers practiced an informal policy of quarantine in which they didn’t cover Rockwell except under extraordinary circumstances.

The lone exception was Herman Obermayer who served as editor and publisher of the Northern Virginia Sun.

“Herman, of course, is Jewish and a World War II veteran, served in the American Army. [He] attended the Nuremberg trials as an observer,” said Clark. “So it was a subject close to his heart, and he could not believe that the Nazis were tolerated to the extent they were.”

It was through Obermayer and a citizens group called Citizens Concerned (formed in 1961) that pressure was put on local law enforcement to enforce zoning codes against Rockwell and his followers.

The Randolph Street property – now home to a high-rise – eventually was targeted by the Internal Revenue Service when the group failed to pay taxes on its printing-press revenue. Rockwell then lived at a home in present-day Upton Hill Regional Park until his murder at age 49 in 1967. (The gunman, John Patler, served eight years in prison before being paroled.)

The party continued in Arlington after Rockwell’s death, but its membership ranks dwindled and it relocated to Wisconsin in 1982.

While not the type of history to be promoted in glossy brochures, the saga of the American Nazi Party is one that should be remembered, those in attendance seemed to agree.

“I thought it was very enlightening,” said attendee Steve Gell, who has lived in Arlington for 50 years. “There are a lot of Arlingtonians that knew very little about it.”

The White Knights of America

How to Infiltrate a White Supremacist Hate Group