Neo-Fascists on the Move from Vancouver to Eugene

" ... historically, fascist movements are allowed to fester and grow in communities when people are beginning to assert themselves as communities of resistance – to oppressive government policies or illegal corporate activities. ...  the hammer is ready to fall on us, after the fascists have started the process by destabilizing communities through violence. ... " 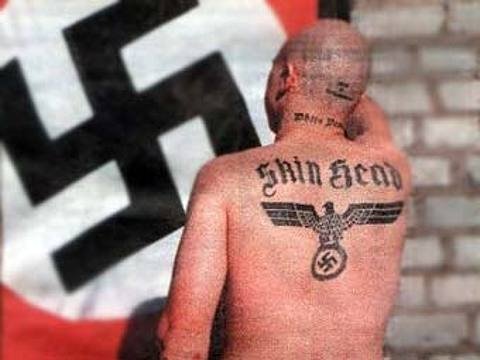 from vancouver to eugene, fascists have been boldly stepping forward.

they have been holding weekly public events at the university of oregon – the pacifica forum – despite the objections of the students and members of the community.

of course, there are no arrests or investigations into the many, many crimes fascists are suspected of committing. police know very well that if they investigate such incidents, they may well find one of their own connected to it.

historically, fascist movements are allowed to fester and grow in communities when people are beginning to assert themselves as communities of resistance – to oppressive government policies or illegal corporate activities. the fascists main tool is violence. they intimidate their targets. they physically attack their opposition. and they win followers among the many frustrated people left out of the economic plans of the ruling class.

when people organize to fight back against the fascists, the police come running in to “restore peace.” oftentimes, the fascists are then absorbed into the police. either by paying them to continue doing what they do, and informing the police about anyone who might stand up to them, or by actually employing them as new recruits or as “auxiliary” personnel. have you seen the “volunteer” police vehicles driving around your neighborhood?

the recent controversy surrounding the red and black cafe (see previous post) reeks of a set-up. the fact that the story only appeared in the media weeks after it happened is extremely suspicious. why was it suddenly newsworthy? were there new developments? no. it seems to me that it took that long for the blogger, the cop and their overlords to get their story straight.

there are outraged people in the community who suck-up to cops – or any figure of authority – and may target the red and black for attack, knowing now that the police will not hold them accountable for their acts. this is a dangerous development.

whether intended or not, this situation has put the red and black employees and customers at risk of attack by fascists. and if they dare to fight back in defense, the police will be there to arrest the ones defending themselves.

this has happened over and over again – in italy, argentina, and germany during the last great economic depression, for instance.

during world war one, the many, many people who refused to support the american war effort, and refused to register for the draft, were targeted for attack by “civic” groups and organizations of patriotic citizens. these groups would stop men on the streets and demand they show proof of identification or that they had registered for the draft. if they could not, they were taken to holding pens and held until their identification could be confirmed, or their draft status ascertained. after the war, some of these groups were absorbed into a new federal organization – the federal bureau of investigation.

we need to understand that we are not facing the same circumstances that we were just a few years ago. this is a new, much more dangerous time for anti-racist, anti-corporate, earth and animal liberation, and other radical activists. the hammer is ready to fall on us, after the fascists have started the process by destabilizing communities through violence.